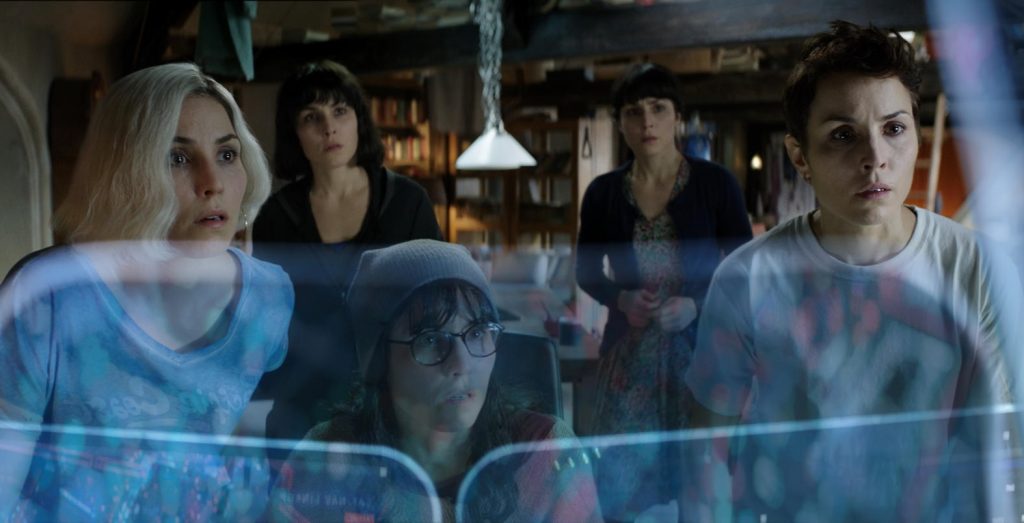 This is a serious question; why do all seven sisters have the exact same, Swedish accent?  I’m not trying to be obtuse, I know that Noomi Rapace is Swedish and I guess they decided to let her act in her natural voice, which is usually my preferred choice across the board.  And I’m also not trying to pick a sci-fi movie apart, I get that you have to bent believability sometimes you get the point across.  But this, among many others, was a small problem that I couldn’t shake as I watched the film.  They live in an unnamed city, their grandfather has an American accent, they rarely ever go outside, and yet they all developed the same, Swedish accent.  If I’m missing some obvious explanation, then I’ll happily admit my idiocy, but otherwise I can’t accept this blip, no matter the excuse.  Maybe I could if the rest of the movie was brilliant, but unfortunately that isn’t anywhere near the case.

As the world population grows exponentially, so does its problems.  When humanity reaches 10 billion people, there simply isn’t enough food to go around, especially with global warming affecting crop output across the globe.  Drought, famine, severe weather; there isn’t enough to eat, there are too many people, and civilization finally understands that something drastic must be done.  A scientist named Cayman introduces the idea of a single child per family policy, which isn’t ground-breaking, but her plan for current and future siblings is; freeze them.  That’s right, cryogenics, a deep sleep, but only until our overpopulation problem is completely under control.  One grandfather, when his daughter gives birth to identical septuplets, refuses to put six of them to sleep, and so develops a lifestyle that will allow them all to live in secret.  Each girl is given a name based on a day of the week, and that’s her day to assume an identity that they all share, Karen Settman.  They enter the world as Karen, come home as their own personality, and try to live the best they can.  But, thirty years later, when one of them goes missing, the entire plan collapses, and every move they make has the potential to kill them all.

I usually find myself in the middle of general audiences and the critics when it comes to a film like this, but this time is an exception.  Audiences think it was awesome, bad ass, so smart, while critics think it was boring, unnecessary, and dumb; I have to side with my contemporaries on this one.  I’m shocked that people turning on Netflix to watch some dystopia were satisfied with this movie, although perhaps I shouldn’t be, given the typical allowance given to this genre.  Audiences eat this stuff up, and I’m guilty of that myself, but at least in this instance I think I saw right through the trick that was being pulled, and I’m not happy about it.  Seven Rapaces was a gimmick that wore off fast, and then we were left with very little.  The plot was basic, the action overly-violent, and god were the characters stereotypical.  Seriously, the sisters were broken down by elementary attributes:  the blonde one was ditzy, the one with glasses was smart, the short-haired one was bitchy, the calm one wore a kimono.  At one point I wanted to look around at nobody and ask the air, “are you fucking kidding me?”  There was a complete lack of effort at the forefront of What Happened to Monday, and by the unsurprising ending, I didn’t care to know the answer.