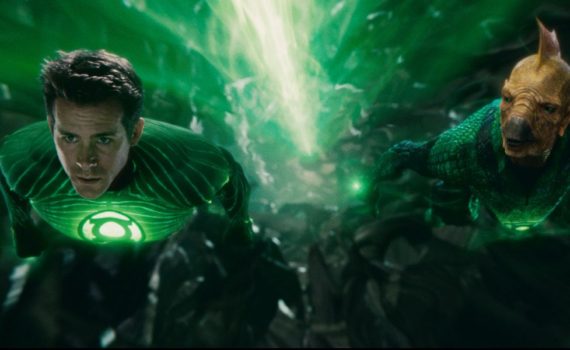 I didn’t think Green Lantern was going to be as bad as I had heard, and then the helicopter-on-the-ramp scene happened, and I regretted that I didn’t turn the movie off sooner.  And it was all going so well; Ryan was funny, Blake was sexy, the backstory was neat, the story was interesting, I was in.  But it takes a talented director to keep a runaway train of a film on its cinematic rails once it gets its full head of steam, and Campbell simply wasn’t up to the task.  He let this movie steamroll him, he let it turn goofy, he never harnessed its power, and I guess that’s why everyone makes fun of it.

Hal Jordan is a ballsy test pilot who’s one mistake away from pseudo-suicide; he’s constantly battling the memories of his deceased father and almost welcoming death.  His ex flies beside him, but she’s growing tired of his bullshit, and he’s running out of chances.  But fate has plans other than his death, Hal is destined to be a great hero, he just doesn’t understand that yet.  An intergalactic team of protectors called the Green Lantern Corps need help battling an omnipotent foe, and the power of the Green Lantern chooses Jordon to take up the mantle of Defender of the Sector, whether he wants the responsibility or not.

There are pieces that worked for a time and could have worked all the way to the end, had the writers and the director not flubbed it all up.  Reynolds was fun in an early version of Deadpool, Lively was hot in an otherwise throwaway role, the villains were supremely evil, there was set up for a second film featuring Sinestro, this character could have been a good edition to the Justice League films; we just needed someone talented who could hold the project together when it started to get shaky.  You know who would have been perfect?  Taika Waititi, who is a brilliant director, would go on to helm Thor: Ragnarok, but was, instead, a really stupid & unnesseccary side character for some inane reason.  Campbell can do better, has done better, he just let the comic book lunacy run amok, the effects were awful, the film took on a goof that it couldn’t support, and the project ultimately failed.  I’m almost more mad at this film because I can see something cool underneath the crap; it’s better than Thor 1 or Thor 2 for a time, only to turn disastrous halfway through, and it, sadly, really didn’t have to go down as one of Hollywood’s biggest flops.