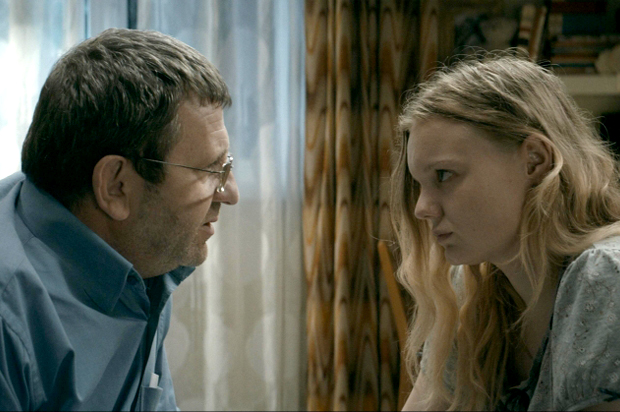 An early candidate for Best Foreign Film at this year’s Oscars is Graduation, a Romanian drama exploring the lengths we go to give our children a better life.  It’s a simple film, about as slow a burn as you are likely to see, with unsettling chunks of action that are all the more desperate for being so out of place.  Those looking for a slow-moving two hours that will ultimately reward you with a keen depth will find that here, but your average audience member will be turned off by the deliberate pace and the lack of dramatic excitement.  So it becomes a polarizing movie perhaps, but one that I think will hold up with critics and will eventually find its way into awards conversation.

On the eve of her end-of-school exams, Eliza is assaulted and robbed.  The plan has always been for her to attend university in England, to move away from her Romanian city, to escape the harsh life that awaits those who stay.  Her grades were always exemplary, and the course seemed set for her to avoid the life of her unhappy parents.  Her father, Romeo, a doctor, gave everything to see her succeed elsewhere, and would let nothing stand in the way of his daughter’s future.  Now, after the attack, and with Eliza reeling, Romeo must face many difficult decisions.  He has spent his life teaching honesty and integrity, but also knows that rules might need to be broken in order to see his only child safely away from this place.

As each step follows another, this imperfect father balances his own morals against his commitment to a better life for his child, and the struggle is incredible to watch.  This character is very complex, as is the situation, and don’t be disappointed if there aren’t clear black & whites at the end of the film.  It’s a story that asks you to question yourself, what you would do, what is the price you would pay, where do you draw the line, the sort of introspection that challenges you long after you turn off the film.  Titieni is great as Romeo, and all the peripheral actors hold up their end, resulting in a movie that’s professionally polished, while still remaining quite realistic.  Look for Graduation this winter, if we haven’t forgotten about it, and I really don’t think we will.