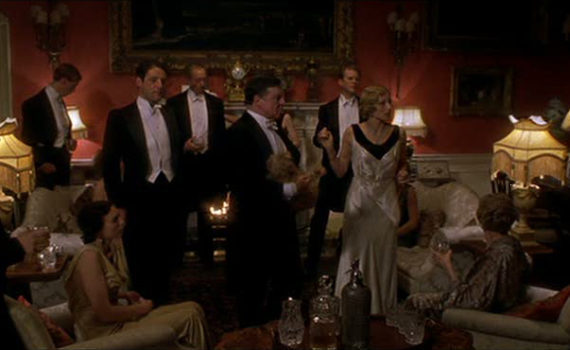 I was impressed by Gosford Park when I watched it as a teenager and as a budding movie buff, probably because of the complexity of the social situations Julian Fellowes was able to weave between the upstairs aristocracy and the downstairs service class, a relationship that I had never even considered before.  How he (and Altman to some extent, although he’s never impressed me as a director, and you can feel that this is Fellowes’ baby, especially given what we now know about what he would go on to do) was able to create this world made up of two parts, and how he depicted them struggling against one another, is pretty spectacular, and is the key reason to watch this film.  The other is the cast, because it’s enormous and talented, but that’s really where the positives end; unfortunately Gosford Park doesn’t stand up in the post-Downton era.

At Gosford Park in England in the 1930s, tradition still clings on for dear life while the times change around the old manor house, its estate, and the people who call it home.  Not as many nobles still hold land, title, money, or to the old ways, but William McCordle does, and he’s throwing a grand party with all of his family in attendance, which means all the people who rely on him for their wealth are coming to grovel and beg, cheat and steal.  Each invitee brings with them their own staff; maids, valets, the whole nine yards.  That means, underneath the main house, a warren of passageways is alive with activity, washing clothes and preparing meals and putting out fires.  The staff have their own lives, their own troubles, which are bound to mingle with those of the upper dwellers, that’s just human nature, whether the rich want to acknowledge the poor or not.  And when the master of the house winds up dead, it may be the least likely candidate who did the deed; in other words, maybe this time the butler really did do it.

Gosford Park is less a who-done-it and more a who’s-who, which is fun in its own right, no one was asking for Clue 2, but also isn’t exactly what I would have preferred.  I remember liking it more when I was young than I did this time around, partly because it only dabbles in comedy, only touches on murder mystery, never committing to any one course of action, always falling back on the idea that we’ll be impressed by the English manor atmosphere and the stellar cast.  And I was intrigued, I would go on to love Downton Abbey, and this was the start of that great show, so give credit where credit it due, but this is almost a first draft, where Downton is the incredible final product.  This film is often just a tease, not a bite, and that’s no good, especially with all this talent (too much probably) ready to create wonderful characters, if they had just been allowed more time/more of a chance.  Maggie Smith, Michael Gambon, Kristin Scott Thomas, Charles Dance, Tom Hollander, Bob Balaban, Ryan Phillippe, Stephen Fry, Kelly Macdonald, Clive Owen, Helen Mirren, Eileen Atkins, Emily Watson, Derek Jacobi, Richard E. Grant, Jeremy Swift; holy cow.  One of the strongest casts ever, a superb idea that would become a near-perfect show, and a film that was nominated for tons of awards; but I think it watched better when it was brand new and impressive because of that, it doesn’t quite hold up after seeing Downton Abbey through and knowing what more can be done with more time and more detailed backgrounds.  I would recommend the show, not the movie, because although the comparisons are many, the qualities don’t match up.