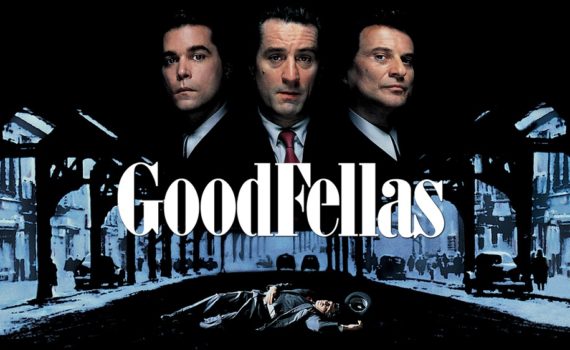 Scorsese’s legacy is written in stone, and Goodfellas is etched right in there as one of his very best, one of the films that made him the king of crass crime.  American audiences are obsessed with the mob, New York Italian crime families, organized chaos, and we feel cool watching the action go down, for whatever morbid reason we have to feel that way.  Scorsese knows how to push the exact right buttons when it comes to the sweeping, downhill, shoot-em-up, fuck-em-up genre, and we eat up his features like candy, even though we maybe shouldn’t love the blood as much as we do.  But, whatever, Goodfellas is a good time, a great time, the best time, and it’s never not the right time for a revisit.

This is the true story of Henry Hill, the wannabe mobster turned informant who lived a life of luxury behind the might of organized crime, interspersed with stints in jail and ending in the witness protection program.  His story gives us insight into the workings of the big mob bosses; how they lead, how they operate, how they silence loud mouths, and how they ultimately end up losing control.  Henry worked with two close allies, Irishman Jimmy Conway and Italian Tommy DeVito, and they all paid homage to the head honcho, Paulie Cicero.  Together, and bribing half the police force, they ran cons and schemes and theft rings that made them all very wealthy, very dangerous, very volatile men.

Scorsese knows what he’s doing, this is his patented style, if just one of his films can be called that, and perhaps never have gangsters been portrayed so realistically.  The Godfather is legendary, of course, but Goodfellas is gritty, modern, messy, high on its own supply, and levels audiences with its quick speed and brutal content.  And it really happened, which only adds to the excitement, morbid as that excitement may be, as I mentioned earlier.  But that’s a different debate; that this movie is an icon above most other icons is not up for argument.  It’s funny, it’s dirty, its characters are incredible, its actors are top of the line, and it all works all the way through.  Goodfellas is as solid as they come, a real immovable rock of cinema.