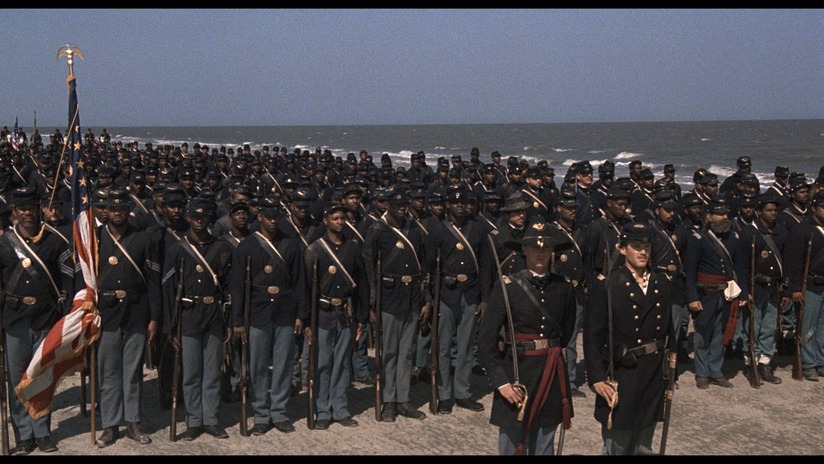 Except for a little wobble by Matthew Broderick’s acting and our present knowledge that James Horner would go on to recycle this music a dozen times, Glory is a perfect film, full of energy and history in a manner that will sweep you off your feet and leave you breathless.  It’s a true story, an important story, and one that is told flawlessly from start to finish, with letters that are in museums today, reenactments of significant battles, sets & costumes that are superb down to the smallest detail, and somehow all that history is wrapped up in the loving arms of high drama and real emotion.  The actors capture the magnitude of this tale and bring it directly into our hearts in such a fashion that we don’t even know that we’re bowled over until it’s happened, and by then it’s too late to throw up walls; we’re already exposed, changed, and eventually grateful.

The Civil War rages on and the bloodbath that is Antietam gives Lincoln the victory he needs in order to issue his Emancipation Proclamation, freeing the slaves of the United States.  Of course, Antietam was a stalemate, the South wouldn’t comply with the order, and the War will continue as usual, but the fires of freedom had been lit, and events would burn forward from this point into the fiery haze of future history.  One major change that came from Emancipation was mounting support for an all-black regiment from the North, with white officers in charge and ex-slaves flocking to join, to fight for a country that was fighting for them.  The 54th Massachusetts Infantry would enter the War Between the States and show themselves to be among the bravest fighters in the land, enduring not only enemy fire but racism and degradation from their own brothers in arms.  Led by Colonel Robert Gould Shaw, the 54th would make their mark at the Battle of Fort Wagner, with the eyes of a nation, and of generations to come, upon them.

Glory is so powerful that they now refer to the 54th as the Glory Regiment, and you can feel that honor and that intensity throughout the film, that’s what makes it so special.  It’s a true story that is part of our American fabric, and to bring it alive this way and this skillfully is a feat that we can’t applaud enough.  Zwick might be a little cheesy, but he knew what he was doing, he knew how to sell this tale, and he got the right cast to pull off the telling.  Broderick is probably the weakest link, but he’s so young and likeable that you root for him, which is exactly what the character demands, so it works.  Of course, our main attention should be pointed toward Washington (who won an Oscar), Freeman (who is purely amazing in everything), and Andre Braugher (who often steals the show).  The rest of the team is rounded out nicely by Cary Elwes, Jihmi Kennedy, Bob Gunton, and Cliff De Young, a great supporting crew who see the movie through.  By the end, you will be drained and then filled back up again, a process that you’ll want to repeat over and over again, if it means watching one of the strongest offerings cinema has ever given us, which is exactly how Glory ought to be described.