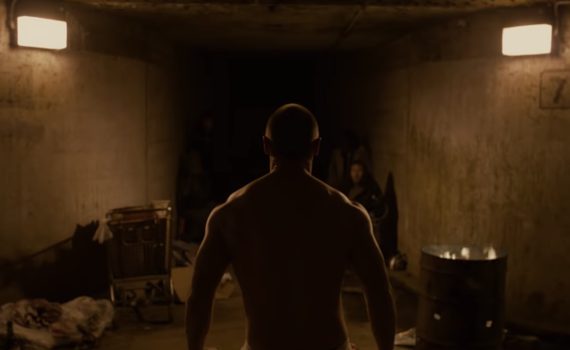 I was surprised when, at the end of Split (which you need to see before watching Glass, so please don’t read on if you haven’t; I won’t spoil Glass but Split is fair game), it was revealed that the story was connected to Unbreakable and that Shyamalan was creating a world, a universe, not just giving us another taste of his predictable unpredictability.  I didn’t see that coming, and although I always try not to guess his twists, because where’s the fun in that, this reveal caught me more off guard than any before, since I simply wasn’t looking in that direction at all.  Split was a return for the recently-maligned director, it seemed as if he was back from the dead, and the addition of a franchise element got us all very excited.  Too bad Glass is a letdown of epic proportions, a mishandled possibility that will make most audiences cringe with unfulfilled expectations.

So just to recap (and again spoilers galore if you somehow didn’t see the first two films), the world now has superheroes.  And supervillains, for that matter, but either way, it seems like superhumans are real, just like the comics told us they could be, and what’s left is to figure out how they fit into the collective existence of the rest of us.  David Dunn is extremely strong and can feel evildoers, so he’s become a vigilante called The Overseer.  Kevin Crumb escaped capture from the zoo at which he worked and in which he killed young girls, and his multiple personalities have morphed into The Horde.  And lastly, the genius with the brittle bones has been hospitalized in an asylum, this man who calls himself Mr. Glass.  The trio will meet and face off, with the fate of the world resting in their ultra-powerful hands.

I was as excited about where this series was going as the next guy, and I was doubly sure that Shyamalan was back with a vengeance, after some time away and some major mistakes.  It upsets me then that Glass feels like it was made in 5 minutes, when M. Night likes to tout that it’s been in the making for 19 years.  The concept is incredible; give us a taste of possible superpowers, let us forget that we ever experienced that, send us in another direction with a madman, bring it full circle, and lay down the final episode like dropping the mic.  It’s a phenomenal idea, and it worked at the beginning, even better in the middle, but sputtered at the end when a great finale was needed most.  Glass is a failure not because we didn’t care or weren’t ready, but because the director didn’t secure the ending with enough strength and it escaped his control, fluttering about in chaos while he tried to tell us what we were watching was what he had intended all along.

Rather obviously, something went wrong toward the end of the film.  All along the way there were down moments, boring parts, actors who couldn’t act, but we would have forgiven all had there been magic at the climax, had Dunn and Crumb and Glass delivered all the awesome promise that we were sold on.  But they didn’t, it didn’t come together, and there’s no one to blame but the filmmaker.  The climax, which is rather long, contained about a dozen characters, and Shyamalan forgot that they might all be doing something at one time.  He showed us one, then the other, then the other, but never together, as if he forgot that he should.  The result was a fight that tripped over itself the entire time, a clunky mishmash of cool ideas that only served to make the film feel like it was shot by a complete amateur.  And then there’s the twist, which was silly, and the writing, which was worse.  Willis, McAvoy, Jackson; they were perfect, couldn’t have asked for better.  But Sarah Paulson, Spencer Treat Clark, Shyamalan himself, the orderlies; they were all abysmal.  Anya Taylor-Joy might have been able to save the day had she been in the film more, but her character was a side note, and everything that made Split work was missing from its followup, resulting in a weak attempt at a genius idea that will go down as a stumble at the end of a relay that lost the championship for the runner you were rooting for all along.