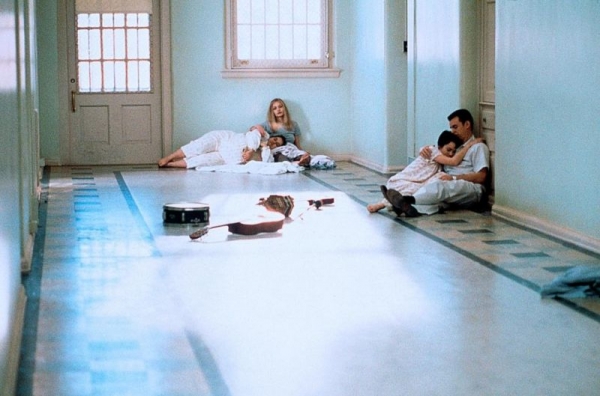 Like Kingdom of Heaven, which I just reviewed and gave a mediocre rating because it wasn’t as good as we thought at the time, Girl, Interrupted is a film that seemed neat when we saw it 20 years ago but smacks a little of absurdity now.  And the main reason is the same as well; the lead actor simply sucks at acting.  Orlando Bloom has a look, but not the talent, and the exact same is true of Winona Ryder, who is by no means as good as her fame would suggest.  She has an air perhaps, an indefinable quality I guess, but that doesn’t translate to skill, and we shouldn’t expect her to carry a film very far; she simply isn’t qualified.  This film falters because of her, and for other random reasons as well, stumbling far too often to be considered great, and aging so badly that we might even consider it poor.

After an affair with a married man and during a time in her life when all options seemed equally negative, Susanna swallowed a bottle of pills with a bottle of alcohol, and woke up in the hospital.  Now, although she’s 18, her parents want her to go to a mental hospital to recover, where she’ll have to check herself in and trust the doctors there to let her out.  On the inside, Susanna meets the other patients and begins to understand a little of what she almost did to herself, with the help of many surprising friendships and the caring Nurse Valeria.  But another girl, Lisa, who has escaped more times than anyone can count, keeps drawing Susanna into destructive tendencies, at first appearing as the voice that she needs to hear to come to terms with her life but quickly becoming something far more harmful.

This is a true story, written by Susanna Kaysen about her year & a half long stay at an institution in the 60s, after a suicide attempt.  So it’s personal, it’s realistic, it’s honest, at least to a point, and I guess it sheds some light on what some people might be going through; if it does that and it helps someone, then bravo.  Otherwise, the movie’s not that good.  The beginning is, the flashbacks, the drips of info, the ward, the characters, all that was intriguing, and I didn’t even mind Ryder.  But then the meat of the movie was asked to be excellent and it just couldn’t do the job, mostly because Winona isn’t a very good actress, she’s more a solid idea than a strong professional.  The rest of the cast is interesting: Goldberg, Jolie, Clea Duvall, Brittany Murphy, Elisabeth Moss, Jared Leto, Jeffrey Tambor, Vanessa Redgrave, Kurtwood Smith.  There are some historic references, the mood is right, but by the end the acting has become a problem, and the setting seems a little forced, not transportative.  Ryder loses it, Jolie becomes a bad guy, Goldberg is pretty one-note, the action because cliched, and you lose respect for what the film might have been saying as what it’s actually laying down isn’t as perfected as you’d like to see from a film of this level of intensity.  Angelina Jolie won an Oscar for her role, which I just don’t see, and which, at the same time, makes the rest of the team seem a little sad since nothing else was even nominated.  Girl, Interrupted might have had its heart in the right place, we might have liked it in 1999, but it doesn’t stand up; it just isn’t strong enough.