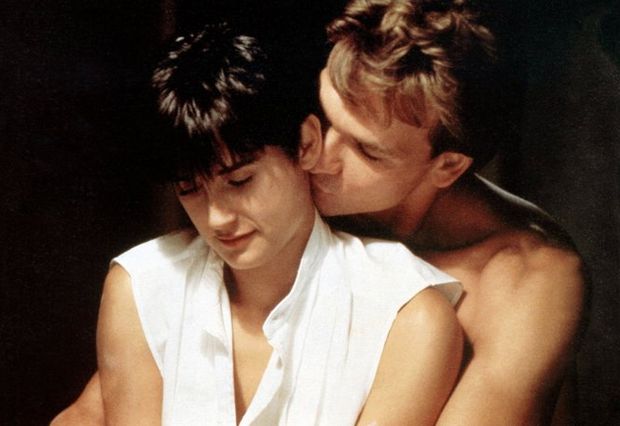 If ever there was a classic romance, one that made housewives ask their husbands why they didn’t love them like like that stud in the movie loved his stunning angel, Ghost is it, and never mind the fact that the story is so far-fetched that demon shadows who take people to hell feature into the plot more than once.  That doesn’t matter, the love in this film is so powerful and its characters are so ripe, that even after 30 years the same emotions come crashing through, and film critics who only remember this movie as a TBS tearjerker find themselves affected in ways they definitely could not have predicted.  Ghost was already an icon but now I see why, and I’m glad I got to enjoy something so special in my own time.

Sam & Molly are the current Jack & Diane, the forerunner of Ross & Rachel, but this isn’t TV, and this isn’t going to end well.  They live in a beautifully renovated space in New York City, he a Wall Street money man, she a free-spirited artist, and their young love could not be stronger.  But one night the couple get mugged, and Sam gets shot.  His spirit leaves his vessel while she holds an empty body in her arms, but he doesn’t go far, maybe because he still has business left to take care of.  Who killed Sam, why is Molly in danger, and how can they communicate between the divide?  Enter Oda Mae Brown, a swindling spiritualist who didn’t think she had any real gift, who is about to learn that she can see the dead after all, and that they need her help.

Talk about an everlasting love, but then Ghost is so much more than just its romance; it was nominated for five Academy Awards, winning two.  1990 was the year of Goodfellas, Dancing with Wolves, Awakenings, Misery, Pretty Woman, Hamlet, The Hunt for the Red October, Edward Scissorhands, Cyrano du Bergerac, Home Alone, Days of Thunder, The Grifters; not too shabby to be in that group, and to be among the very best when all is said & done.  All these years later, this film still has an impact, and that’s thanks in large part to its very simple base; love is powerful, revenge is sweet.  Swayze is the perfect lead, so sad, so lovable, and although Moore isn’t a good actress, her demeanor alone fits the bill here, and makes perfect sense, especially in that iconic pottery scene.  The real star, however, is Whoopi, who won Best Supporting Actress, and whose film career really took off (and completed) in the 90s.  She was wonderful, the much-needed comedic break to the weight of the afterlife plot line, and so irreplaceable.  The amazing music, the surprisingly interesting cinematography, the villains and heroes; there’s just so much to enjoy about this timeless tale, and if you haven’t seen it lately you really should remedy that.