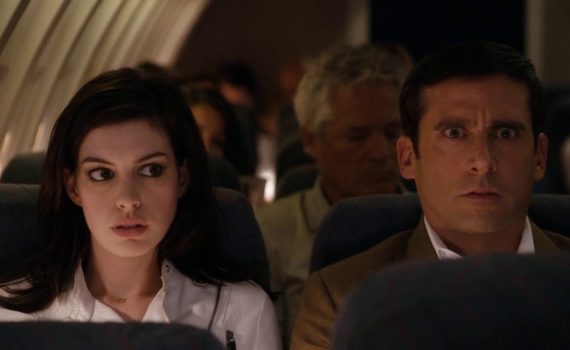 The greatest thing about Get Smart, at least now, is knowing how incredibly famous the three stars of the film will become, and how legendary some of the veteran side actors still are to this day.  It’s the cast that makes the film, because it’s definitely not the comedy.  The old TV show was fun, silly, good for its time, but probably shouldn’t have been made into a modern feature film.  Oh well no one leaves well enough alone these days, so here we are with  a mostly unfunny film version, which we needed about as much as a third nipple.  Still, it isn’t all terrible, and now we can look back ten years in the past on the earlier parts of the careers of these superstars as smile.

Secret Agent Maxwell Smart is tired of working behind a desk as an analyst, he wants to get into the field as an operative, where he knows he can really make a world of difference in Control’s fight against the evil Chaos organization.  His skills are unquestionable, but he’s a bit of a screw up, and would probably be as likely to shoot himself as his enemy if a confrontation even came to a firefight.  But sometimes you work with what you’ve got, and when Control HQ is attacked, Max is paired up with sexy Agent 99 to head to Russia and discover Chaos’ secret plans.  Max knew he’d have to face his fears and step up to the plate in order to make Control proud, but he never dreamed he’d fall in love on the mission as well, a sticky situation that he has no idea how to resolve.

The show was entertaining, if you’ve ever caught a rerun, but it was a far cry from exceptional.  The movie version doesn’t really compete or even do the program justice, barely registering as funny and mostly bordering on stupid.  I can only think of one laugh-out-loud scene, when Max is in the airplane bathroom shooting himself with tiny, painful darts, and that’s only funny in the way that 40-Year-Old Virgin already was.  The rest is mostly stupid and never super original, resulting in a film that you could describe in the same way.  Carell is naturally gifted, he doesn’t lose that, so that’s always hovering over the movie.  And Hathaway is one of my favorite actresses, a chameleon who is also stunning, a true Hollywood megastar.  The Rock is pretty terrible in his role (he was still learning), but the side guys make up for it: Alan Arkin, Terence Stamp, James Caan, Bill Murray.  There’s really no need to watch Get Smart if you missed it a decade ago; you didn’t miss too much.