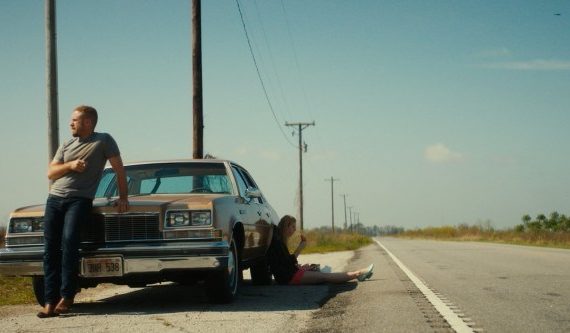 So far, Melanie Laurent has only proven herself to be a mediocre director, and that had better change soon if she wants audiences to continue to give her films a chance.  She’s a solid actress, I’ve enjoyed her many times (Inglourious Basterds, Enemy, By the Sea, Operation Finale), but Breathe was only OK, safe and typical, and she needs to supply us with more of a reason to get excited when we hear that her name is attached to a movie, other than in front of the camera.  Because Galveston went down the same road very quickly, becoming something interesting that lost its magic halfway through, that started to veer off course way too soon.  And if you can’t make a killer film with Foster & Fanning as your leading pair, you might need to rethink your chosen profession.

Roy is a two-bit mob enforcer in New Orleans, coming from a life of crime and resigned to the fact that he will always be living on borrowed time.  When a woman comes between he and his boss, the hitman becomes the hit, and he barely escapes being murdered.  During the set up, Roy frees a young woman who was also scheduled to be eliminated, and they skip town together.  Her name is Rocky, she’s a teenage prostitute, and she just wants to get some semblance of a clean life back, so that maybe someday she can start over again.  On their long getaway toward Galveston, Texas, Roy and Rocky stop in the small town of Orange, where they take Rocky’s little sister Tiffany from their abusive step-father, making it a trio who hit the road and then hole up in a cheap motel for a week, laying low while the heat dies down.  The relationship formed between Roy and Rocky becomes something that neither is willing to give up, but when the butcher’s bill comes due in the form of Roy’s old boss, someone will have to pay.

Laurent is a Hollywood actress, as well as a French film star, so I’m sure she knows her stuff when it comes to American cinema, but something about Galveston struck me as dishonest, or at least without that personal touch that’s so important, becoming just another crime movie when the place and time and people, which all were pivotal, should have been the pieces that made the magic happen.  I liked The Florida Project, it felt transportative, and I loved Hell or High Water, which focused on a specific area until audiences felt like they had lived there all their lives.  That’s what Galveston was missing, that honest quality of being real and raw, instead always seeming like a cheap copy of something better (maybe the book).  And again, Foster is brilliant, Fanning is astronomically improving; if you can’t succeed with them you need to see yourself out the door.  They are why this movie worked at all, their performances, and I was definitely invested for most of the journey, really getting into the story and the characters.  But then the bottom dropped out toward the end, and like I said, Laurent couldn’t weave in anything wonderful other than what was occurring naturally between her stars, and that’s a big problem.  She needs to deliver the next time out, to show us that she isn’t only a surface director, that she can go deeper, because audiences only give so many chances.