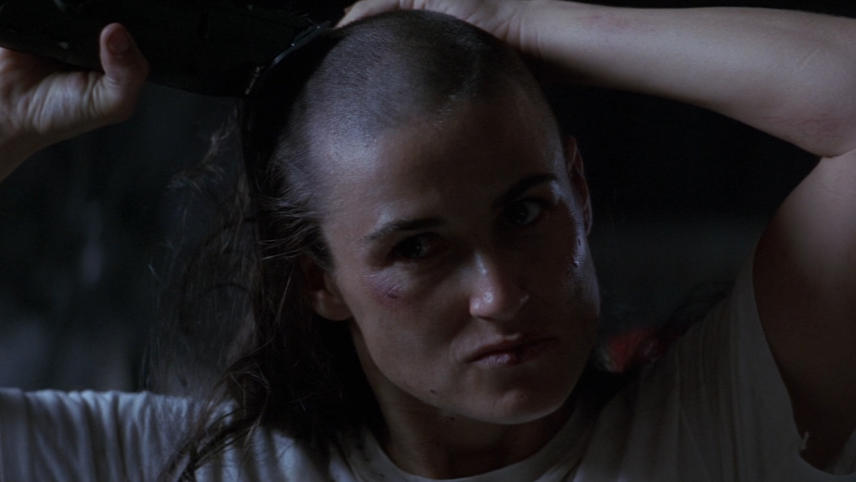 Why does this movie feel like it was made about 50 years ago, not about 25?  I guess not all kick-ass 90s flicks age the same, but G.I. Jane‘s quality feels much lower than it should, as if it was made in a vacuum that wasn’t sealed very tightly.  Maybe that’s simply because Demi Moore and Viggo Mortensen aren’t good actors, and because Ridley Scott isn’t really a very good director, the result being a film that could only make a splash, now withstand the time.  And still, all that being said, there’s still a pull when it comes to this story and this genre, because it’s at the heart of why we go to the movies, which is probably the only thing that Scott can be said to do well on a regular basis; put our butts in seats, whether the product is actually worth it or not.

The Navy is toying with the idea of opening up combat training positions to women, as the politicians haggle and deal, and as real lives are considered nothing by publicity stunts.  But, at the heart of the issue, there is something greater, something truer; the fair treatment of women in a world unfairly dominated by men.  One woman, Jordan O’Neill, is up the challenge, both physically and emotionally, and she’s here to prove that she’s no one’s pawn in any game, that she’s a soldier first and a teammate second, that nothing comes between her and the mission.  Navy SEAL training is the roughest in the world, but G.I. Jane is going to make it to the end, not only to prove that women can do the work, but to show everyone that, to heroes, quitting is not an option.

Ridley Scott knows how to cheese up the moment to the point that audience swoon, but it’s almost like, if you resist the knockout gas for long enough, you’re conscious to see when shit really hits the fan, and that’s not pretty.  Scott’s movies are mostly messes, with larger-than-life themes that bludgeon us over the head until we cry “great”, but only because we can’t see straight.  G.I. Jane is like that, a giddy gauntlet of entertaining aspects, but not really a fully functional film that can operate in a bubble.  Hence the broken vacuum, I guess, and why the movie smells funny in general.  And again, part of that is lack of talent, because no one here knows what they’re doing, or simply can’t do it well, and that’s something we maybe forgave them for at the time, but it’s pretty obvious now.  Moore & Mort are shoddy, the action scenes are downright stupid, and the only real reason we hang on is because we love the idea of basic training, mostly because we’re afraid of ever having to go through it.  So, enough works to get the film to the finish line, and I guess it deserves a little forgiveness for age, but don’t peer too closely at the finer details, because you’ll find that they, unfortunately, are missing.