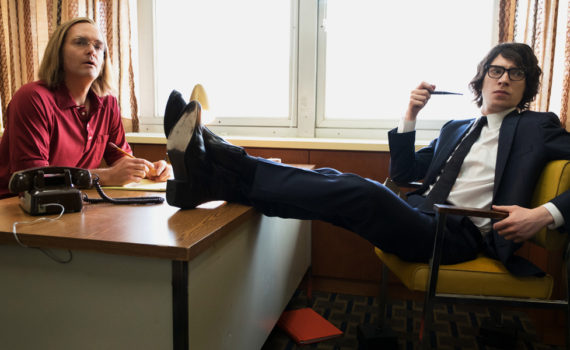 How I missed this movie’s release I’ll never know; I usually keep up with what’s being brought directly to Netflix.  They do good work these days, even if the occasional dud gets mixed in every once in a while; that’s the same with every studio, giant standard of the industry or fledgling production company.  Netflix has been improving, at the very least, their films are a great chance to see quality cinema on the day it’s released and without having to leave the comfort of your living room.  I’m shocked I missed the announcement about this one, especially since I’m a big Will Forte fan, and probably one of the five people remaining who watches The Last Man on Earth.  But I’m glad I noticed A Futile and Stupid Gesture in passing, checked it out, and can tell you that it is just another surprising success to start off Netflix’ year, matching The Polka King in true comedy and real honesty.

This is the absolutely unknown and shockingly factual history of National Lampoon, but more so the story of its co-creator, Doug Kenney, and his monumental influence on American comedy.  Doug was at Harvard with his best friend Henry and they were having a ball.  They wrote for the Harvard Lampoon, an irreverent magazine, they threw wild parties, they wrote pun-filled books, and they enjoyed every single day of their college careers.  When senior year came and went, they decided to throw an after party, to start an adult magazine that would combine Mad and the New Yorker, that would show boobs and critique the President, that would change the world of humor.  So began a multi-million dollar empire that would reach radio, TV, and even Hollywood, though Doug Kenney remains to this day a name that almost none of us recognize, a man whose fate almost no one understands.

I was blown away by how much I didn’t know about this guy and his influence on what I watch today.  Not only did Doug & Henry start the National Lampoon franchise, but their writing style was basically stolen by Lorne Michaels for his new show, maybe you’ve heard of it, Saturday Night Live.  Then Doug would take his voice to California, make Animal House and Caddyshack, no big deal.  But the real story is Doug’s personal crisis, his addiction vs his talent, what he went through to deliver us these outrageous sketches.  His impact is larger-than-life, and it’s about time we got to know him.  Forte was a great choice to play Doug, Gleeson was equally excellent as Henry, and the rest of the cast is a cornucopia of actors and actresses playing some of the most influential comedians of all time as they got their start with Lampoon: Gilda Radner, Christopher Guest, Bill Murray, John Belushi, Chevy Chase, Harold Ramis, Rodney Dangerfield.  I’ve never liked Joel McHale, but his Chevy Chase was impressive, I almost applauded.  This is a must-see slice of Americana, done in a quick style that is easy to consume and enjoy.  Watch it if you’ve ever laughed at a movie; chances are you’re seeing Kenney Comedy coming through from 40 years before.