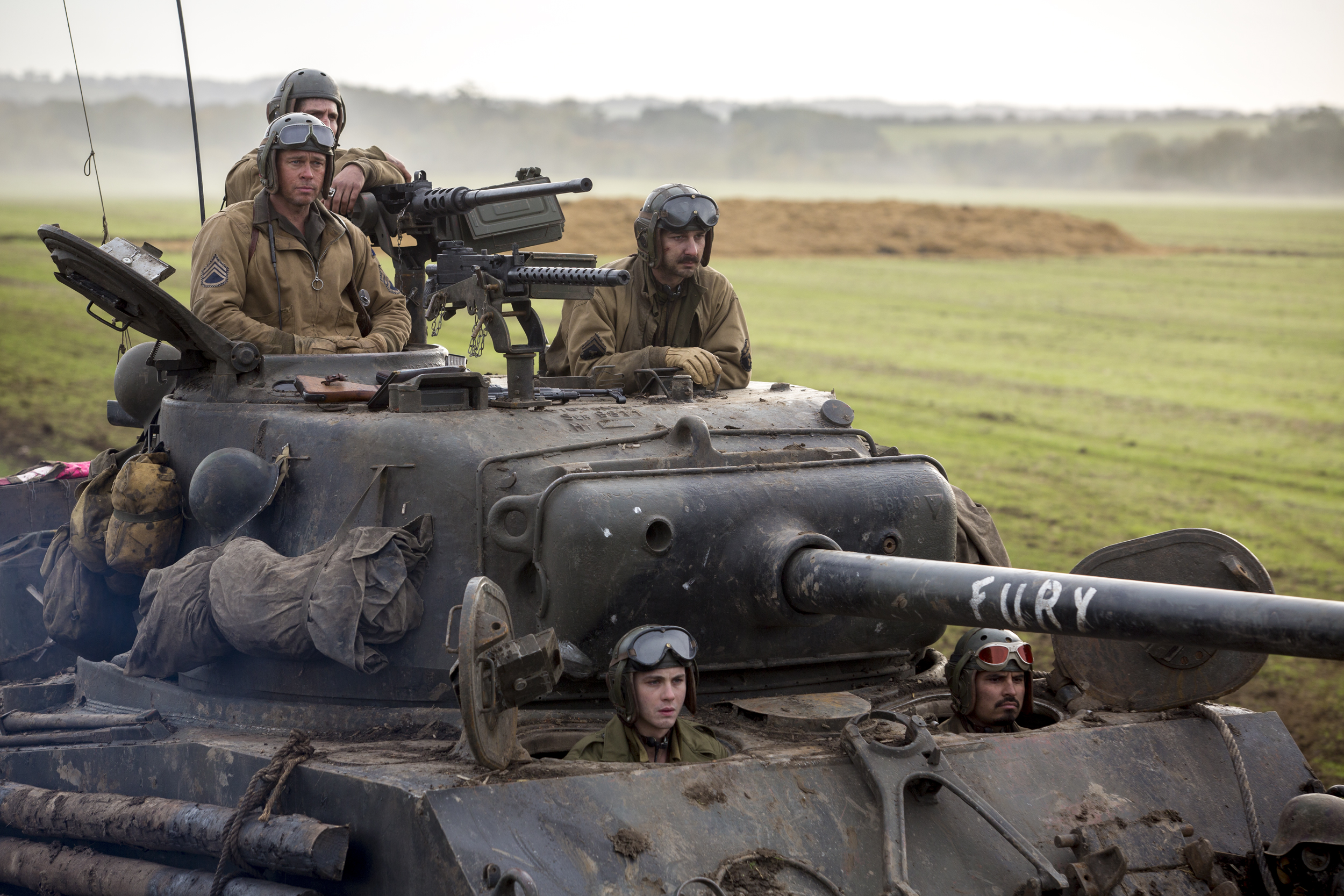 What’s not to like, right?  We all love a good WWII story; the 2nd World War kicks the 1st World War’s ass, as far as on-screen appeal goes.  It was a time on the verge between modern & archaic, a war against a solid evil, a “glorious” American-led fight that left the trenches behind and exposed itself in the open field of battle.  If that doesn’t get your red-blooded heart pumping I don’t know what will.  The point is, WWII made for good cinema, regardless of how terrible being on the front lines actually was.  As an audience, we love to watch the USA fight Nazi Germany; it feels very one-sided, good vs bad, like we were destined to win.  And would we like to watch Brad Pitt portray one of those virtuous soldiers fighting for freedom on enemy soil?  Why yes we would, and never mind that he and his comrades exhibit and encounter some of the worst characteristics of what really could be the war to end all wars; we just want to see him drive a tank.

Sargent Don Collier is the commander of a tiny army, a group of five total soldiers who man an American tank, making it their home for the duration of the war.  Christened ‘Fury’, this weapon on wheels has survived countless battles across Africa and Europe, keeping its team safe from harm and the enemy on the run.  But a recent battle has finally delivered the butcher’s bill, killing the crew’s assistant driver and reducing the team to four.  With the war almost over and the Allies deep within the heart of Germany, it’s time for one final push, one last battle with the remaining, resistant Nazi SS.  ‘Fury’ will lead the mission, but they need a new crewman, and that’s where Norman Ellison comes in.  He’s a raw recruit, a clerk who has never seen combat, here by some mistake.  But there’s no time for paperwork, its time for war, and as the tanks roll out this new five-man team must work together, trust each other, and take no prisoners, if they are to have any hope of making their way home again. Let’s start with the good.  If what you wanted from this film was a WWII action film that focused on tank combat, boy did you get it.  Battle after battle, firefight after firefight, RPGs, anti-tank guns, tanks exploding, tanks blowing things up, men shouting orders, soldiers dying, dogfights; you could not possibly ask for more from a war movie.  It was a bloody mess, a dirty & desperate look at a battle that was essentially over but would not end.  Think Band of Brothers but on a much smaller & more violent scale.  If you’re a fan of this type of movie, Fury is waiting for you.  And the support was there to keep the film from veering off into absurdity, to keep it grounded in a bitter reality that went beyond tanks & guns.  The actors did their best to show us the darkness of war, the fear & terror, the desire to live above all else, the evil that men can reign down upon themselves.  Brad Pitt was a strong leader, a solid character, and as handsome as ever, despite scars and dirt and haircut.  Logan Lerman and Shia LeBeouf were good as well, giving us opposites to understand, faces in a faceless hell.

But all was not perfect.  First, the film copied unabashedly from Saving Private Ryan.  The respected leader, the old crew, the newbie, the mission, the fights along the way, the German cities, the desperate stands; perhaps the history of the war lends itself to these story lines, but the plot was too similar for comfort.  Fury did take that idea to a new level though, one that was even more grotesque, if that can be possible.  The bloody visuals were almost 300-esque at times, an over-the-top take on WWII, an Inglourious Basterds and Tarantino visual that gloried in the gore, that made death seem a little less awful and a little more exciting.  I’m not saying I didn’t enjoy the action; I was prepared for tanks & guns continuously lopping off limbs and bursting heads like melons.  But instead of the reality of war we got the dramatics of a movie; something that won’t sit right with the more staunch among you.  I can’t take any points away for excitement or entertainment; those were present in excess.  And Fury is the war movie you’re looking for if what you want is continuous death.  Just don’t expect a history lesson, expect blood.