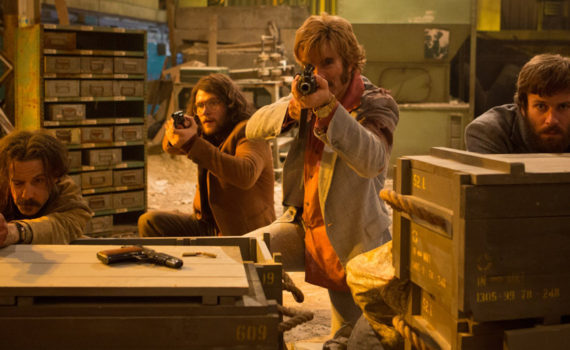 Ben Wheatley and Amy Jump are a director/writer combo, but I almost feel like they need a third person to help them make movies.  I don’t say this to be insulting, because I enjoyed both High-Rise and Free Fire, up to a certain point.  Past that point, there needs to be another person to rein in the wacky and to get it tied to a firm fence post, because in both films my love dissolves when the plot forgets to stay put.  My favorite director, Wes Anderson, needs the same thing, another voice to shout his down when he’s lost connection with reality, an editor to put on the brakes when the wagon is heading for a cliff.  My basic point is that I wanted to adore Free Fire, that I did for about the first half, but that it failed to continue the momentum, and that’s a bleeding shame.

An arms deal in an abandoned factory between the IRA and a South African gunrunner; what could go wrong.  Especially when you add in two independent brokers, a pair of thugs for each side, dozens of automatic weapons, and a suitcase full of cash.  The scene is set for a battle royale once the deal goes south, and you know it’s about to.  Chris & Frank the Irishmen, with some dimwitted relatives in tow.  Vernon the wack job from Johannesburg, with equally violent sidekicks.  Justine the beauty, Ord the tall drink of water, and maybe a few extra shooters thrown in for good measure just to make things more exciting.  Shit is about to hit the fan, and anyone who makes it out alive will have pushed fate to the absolute limit.

I love the set up, I love the characters, and the humor from the very beginning until about 30-40 minutes in is to die for.  Free Fire is exactly what I wanted for about half a short movie; the dumbasses making the deal, the awesome accents, the 70s vibe, the bumbling brutality.  Copley specifically is amazing, never better, just a horrible person who you’re rooting for to die but also to keep cracking you up.  And Jack Reynor, I don’t know what he did, but if you had told me he was Seth Rogen I would have believed you.  So all was well, until it wasn’t.  You can only watch people lying in the dust shooting at each other before you need something else, and that something else never really came.  As action-packed as it was, I started to get bored by the end, and when the deaths became extremely gruesome I was probably already checked out instead of impressed.  The ending left a lot to be desired too, so I wish I could just go back, watch 45 minutes, write a climax myself, and walk away having seen what I wanted instead of what was actually delivered.