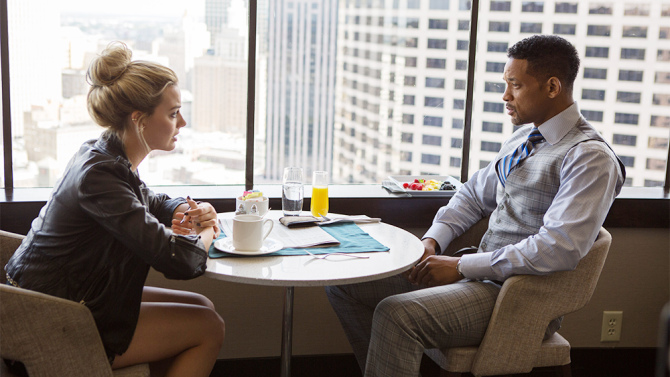 It has finally happened; Will Smith got old.  And I mean that in every sense of the word, I’m sorry to say.  The guy still looks great, very buff, I give him credit, but he’s 47 years old; he’s no longer a fresh prince.  He finally looks like he’s aging, and I don’t say that to be mean, he’s still very attractive, it’s just a fact that age catches up to all of us in the end.  And so does the end of our schtick, for that matter, qualifying as another way Big Willy is young no more.  It’s gotten to the point where we might not want to see Will Smith as Will Smith anymore, which is why The Pursuit of Happyness earned him respect when After Earth didn’t.  We’re done with that whole thing, the action star, the suave dude, the lady-killer, that’s over.  But hey, he doesn’t want to accept that, I can’t blame the guy for making money beating a dead horse, I just don’t have to enjoy it.

Welcome to Nicky’s world, the land of the con.  He’s the best, the smartest, and the most successful con artist of his generation, with the money to prove it.  He’ll steal anything, risk everyone, and lie all the way to the grave if that’s what it takes to pull off a heist.  Nicky is the best, no doubt about it.  And that’s why Jess wants him to teach her.  She’s a natural, a pickpocket, a sexpot, a light-fingered trickster who has her whole illegal future ahead of her.  But when she gets cut out of Nicky’s life without an explanation, resentment builds, and years later when the two meet again, they might not be such loving partners.  The crime of the century is about to go down, everyone’s lookin’ to make a buck, and the stakes are the highest they will ever be. I don’t have a problem with a film recycling an old plot.  There are only so many stories to be told after all; sometimes you have to tell them again.  So it’s not that I’m upset about the whole con-artist storyline being reused yet again, I’m upset that they pretended that this was the first time.  It was like Will Smith was talking to a room full of idiots who had never heard of crime before.  Explaining how to pick a pocket, using ridiculous criminal lingo, surrounding himself with every cliché character we have ever seen; it was all a bit much.  Had this film been Inception I might have needed a little coaching since, umm, that was made up and needed context.  I don’t want to learn how you sell your stolen goods, I don’t want to hear your idiotic con man terms, and I can’t waste my time trying to become invested in a story that makes it seem like either I or the director has been living in a cave since The Sting.

And the unbelievably hijinksed story wasn’t the only problem.  Will Smith just isn’t an action hero anymore.  He looked tired in every scene, like he might lay down and not get up again.  He didn’t have the energy & charisma needed for this role, though I’m not sure who could have pulled the poorly written part off better.  Having a walking, talking, drama school robot at your side didn’t help, I’m sure.  Margot Robbie might be the hottest thing since Scarlett Johansson, but her acting talent was exposed here.  I liked her just fine in The Wolf of Wall Street, but there her part was a caricature.  In this film she was asked to step up and she failed.   It was ironic that she was a con artist, because I always felt like she was acting, even when she was supposed to be sincere.  Not something you want to think during a movie, that a lead actress was just fed every line, that she’s hiding an accent, and that you’d much rather she just stop talking.  Come to think of it, I can’t think of anyone I wanted to hear more from; not the leads, not the sides (Gerald McRaney, Rodrigo Santoro, BD Wong), and not my own internal voice berating me for coming to a movie that I had to know would be bad.  And it was, with a tired plot, a terrible script, awful acting, sex appeal gone AWOL, and fake NFL jerseys that made me laugh out loud, and not in a good way.