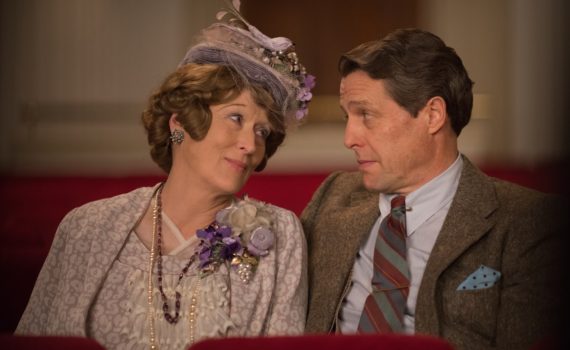 Frears is the director behind Dangerous Liaisons, High Fidelity, Dirty Pretty Things, The Queen, and Philomena, so he knows a thing or two about a thing or two.  Streep & Grant are living legends, in their own rights, and with an amusing/touching true story thrown in for good measure, the stage seemed set for a smashing success.  And the word ‘stage’ is quite appropriate here, as the entire film felt like a play, from the extravagant sets to the outrageous characters.  Actually, things would have worked out much better had Florence Foster Jenkins been either a Broadway show or a film musical, because it was definitely lacking that extra oomph, that special something that would set it apart from the other quality movies of the year.

Based on the true story of the fabulous Madam Florence, this tale of perseverance and love should be an inspiration to us all.  Florence, a wealthy New York aristocrat and former pianist/singer, has seen her talents diminish in her later years.  She is sick and may not have long left on this Earth, and so makes it her personal goal to perform at Carnegie Hall, despite her, umm, imperfect vocal tones.  Her husband, St. Clair Bayfield, is an extremely devoted man, making sure all who attend Florence’s shows understand that her love of singing supersedes her actual ability.  But a concert of this magnitude may attract a few who don’t understand the magic of Florence’s unpredictable voice, criticism that Bayfield will protect her from with every ounce of his love.

This woman’s story is fascinating, and the film captures it very well, adding in the messy details to give us a very personal feel and an understanding of a complex situation.  Florence may have been one of the world’s first cult classics, in a manner of speaking, and had something to teach us all in the way she handled her lack of beautiful technique with unashamed grace.  Streep was wonderful as Florence, though I’m not sure I’d call it Oscar-worthy, exactly.  If anyone delivered that kind of performance it was Hugh Grant, who brought humor and heart in buckets.  Helberg I could have done without, Ferguson was attractive but pointless, and the entire film would have been better served as a musical, and old NY throwback that we could all fall in love with.  As it stood, the movie was fine & fun, but a little boring in places and never spectacular.