Movie Review – Flight of the Navigator 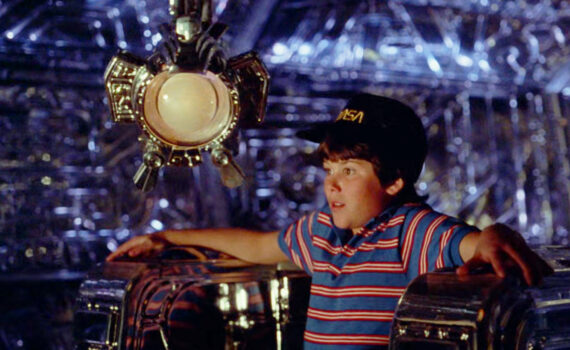 Movie Review – Flight of the Navigator

We who love movies also tend to love John Hughes, and can probably rattle off a list of his films by heart; directing Sixteen Candles, The Breakfast Club, Weird Science, Ferris Bueller, Plane Trains & Automobiles, She’s Having a Baby, Uncle Buck, Curly Sue, and writing National Lampoon’s Vacation, Mr. Mom, Pretty in Pink, The Great Outdoors, Christmas Vacation, Home Alone, Dutch, Beethoven.  The 80s & early 90s belonged to Hughes, but there was another director pumping out the hits at the time, films that would become period classics, a director who gets far less attention, and that would be Randal Kleiser.  The Boy in the Plastic Bubble, Grease, The Blue Lagoon, Grandview USA, Flight of the Navigator, Big Top Pee-wee, White Fang, Honey I Blew up the Kid; Kleiser’s successes reach back into the late 70s and then mirror Hughes’ timeline.  He’s a director to know, respect, and appreciate, as is this 80s family sci-fi flick that I dare you not to love.

David Freeman is a typical American kid from Ft. Lauderdale, Florida, spending time with his family on the 4th of July, thinking about fireworks and girls and training his dog; dude’s living his best life.  But when he goes into the woods to walk his little brother home and falls down a ravine, the world changes around him while he’s knocked out.  Walking back to his house, he finds that it’s no longer 1978, but rather 1986, and his family doesn’t live there any more.  They’ve spent the last 8 years trying to find their son, the boy who vanishes, and now he pops up out of nowhere, not having aged a day.  At the same exact time, a craft that looks like it came from another world becomes tangled in power lines, and somehow David is connected to this spaceship, and it calls to him, though he doesn’t understand why.  He & the ship are about to embark on an awesome adventure, through time and space, while building a friendship that will last forever.

I watched this movie so much as a kid, it’s ridiculous. My sister & I would watch it over & over again, saying “compliance!” repeatedly, and generally wishing we too could go on an adventure with an alien spaceship because it looked so cool.  It’s just such a fun story, so simple & so short, full of wonder and excitement and joy, with just enough of a dark edge that you can kinda spook yourself out a little if you want to.  I was surprised by how small a package this tale comes wrapped in, but really, that’s all that is necessary; we get the point and the entertain value very quickly and easily, it’s not a problem that it’s on 80 minutes long.  Kleiser is such an underrated director, he was so impactful, and it’s nice to revisit his films; they are very strong, especially when considered as time capsules or at least fitting snugly into their era.  My kids loved this goofy little gem of a movie just as much as I did, and I hope it lives on forever in the hearts of those who want it to stay.