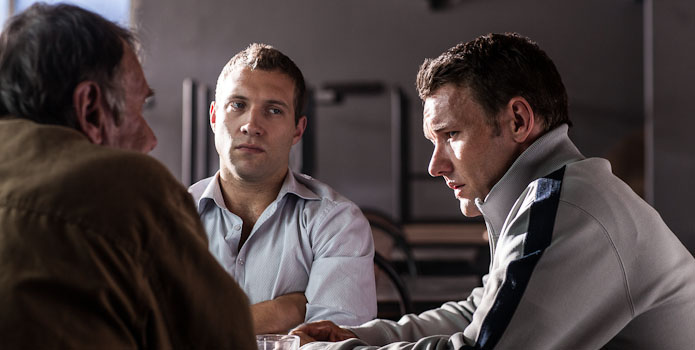 When I saw Warrior, the 2011 MMA drama, it shocked me with its quality.  Not only the story, which was a little cheesy though likeable, but the acting as well was much better than I had imagined it would be.  After all, who were these guys, Joel Edgerton & Tom Hardy, punching at each other and pretending to be brothers?  Oh, I don’t know, they just ended up being the two hottest actors of the last few years, excepting only Michael Fassbender perhaps.  Warrior was a career-launching film, made great by its two leading men, who were nothing like I imagined and haven’t taken their feet off the pedal yet.  I actually had envisioned someone more like Jai Courtney in the film, who is exactly as bad and actiony as you would think.  And, no surprise, that doesn’t translate well to crime dramas.

Detective Malcolm Toohey of the Australian police force just made a career bust, getting shot in the process, but cementing his rising stock and earning a big party in his honor.  But on the way home, something terrible happens.  His car grazes a kid on a bicycle, the kid falls, and receives brain damage.  The problem is, Malcolm had been drinking, and so can’t tell the complete truth about the incident.  No trouble, fellow detective Carl Summer understands, and will help fudge the reports, protecting a fellow cop.  But young detective Jim Melic is much more of an idealist, wanting the law to be served no matter what.  And so a battle of subterfuge begins, one side hiding behind the shield, the other digging for the truth.

This film was saved from bad places by two things: a simple story and some excellent acting.  There was just the one event, with all the other cases on these detectives’ dockets put aside as periphery.  The point was, what would you do in a similar situation, what is right, was is allowable?  And the film stuck to that premise, didn’t lose track, didn’t wander off.  Edgerton & Wilkinson were incredible, each the villain in a way, but each playing it differently.  Their talent was on display in a major way, and they saved the movie.  Jai Courtney, on the other hand, was awful, and so was the end of the film.  The pace had slackened, Courtney had taken on a bigger role, and things ended up far less satisfying than I thought they would.  So, Felony ends up as a fine movie with some great acting, but without that extra “it” to make you remember.