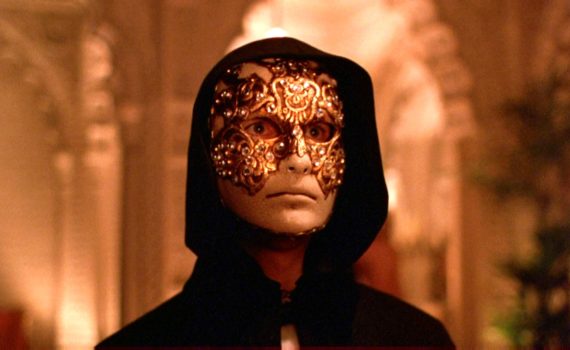 Even being able to rattle a few Kubrick films off the top of your head, it’s still impressive to see his filmography across a page or screen: Paths of Glory, Spartacus, Lolita, Dr. Strangelove, 2001: A Space Odyssey, A Clockwork Orange, Barry Lyndon, The Shining, Full Metal Jacket, Eyes Wide Shut.  Except for some early work, those are his movies, and he died before the last one was released, having only just finished the final cut.  Cruise & Kidman would divorce not long after the movie had its time in the sun, so perhaps there’s a curse that could be associated with the project, if you believe in such things.  It’s definitely a film that holds an edge and forces audiences to uncomfortable places, so although it will probably never be considered one of Kubrick’s masterpieces, it’s still a haunted and haunting feature.

Dr. Bill Harford is wealthy, connected, has a lovely wife, a beautiful daughter, a great apartment in New York City, he’s an attractive man himself, and life couldn’t be much better.  But one night changes everything, when his eyes are opened to possibilities he never imagined.  His wife, Alice, reveals to him that she once almost left him and her child and her security behind for just one night with a handsome sailor.  She didn’t, but just knowing that she might have shatters Bill’s image of his perfect existence.  It also allows him to picture himself with other women, and over the course of a night he is tempted in many different ways: a friend, a young girl, a prostitute, an orgy.  His dabbling in a world he knows nothing about will end poorly, he knows this, but he also can’t stop himself; once the door to infidelity has been cracked, it’s hard not to peak through.

If you’ve seen a Kubrick film, you know how weird he can be.  Weird and genius of course, but weird all the same.  Eyes Wide Shut focuses on sex; how curious we can be, how sheltered we are without knowing it, what lies around us that we might not want to see.  But also how love can be stronger than our sex drives, which is a hopeful message, if one that the characters in this movie don’t always hear.  There’s a lot of nudity, it’s fairly explicit without being shocking, so be prepared if you haven’t already watched.  The style here is very specific, very deliberate, not just long but also long-seeming on purpose, dragging out the pace until audiences aren’t sure what to do.  We spend most of the time feeling awkward and unsure, slightly turned on and mostly confused, but I think that’s what Kubrick was going for, and there’s no doubting that he’s the master of the odd.  This is another strong showing by the legend, his last one, and a good chance to see Cruise & Kidman as a couple in their prime; watch and appreciate.