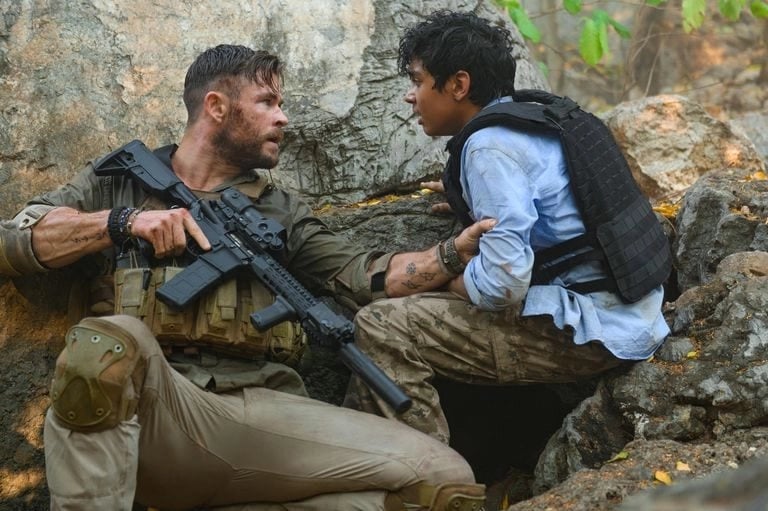 Extraction is this generation’s Man on Fire, with a little John Wick and Spy Game thrown in for good measure, but holding tight to the hostage rescue genre and riding it for all it’s worth.  During the 2020 Pandemic, we’re looking to streaming services for entertainment, and Netflix has the original content we crave, at least until they run out of stuff that’s already been filmed.  Extraction comes out at a time when we are looking to be saved from our own boredom, and, what’s more, it delivers high quality even when the bar is set very low.  We’ve seen this style before, it isn’t exactly mind-bending, but the concept is executed very smartly, and you know, right now no one really wants their mind bent anyway.

Tyler Rake is a fringe specialist, a mercenary who works for no one but himself, a man who can get the job done no matter how bloody it is.  He’s got his own personal demons, sure, but he knows how to handle himself in dangerous situations, which is why he’s called upon when no one else will do.  The latest mission; to rescue a child of a drug lord who is being held prisoner by another, more evil drug lord.  Supposedly a deal is in place, but of course that’s about to go south, and the whole of India and Bangladesh is about to be up in arms, picking sides, and making it more difficult for Tyler to do his job.

Just like with Man on Fire, we’ve got a lone wolf with a conscience heading into a battle that isn’t his own to rescue a kid that he’ll grow to care for.  There’s also an important bridge scene, lots of heroics, an awesome undercurrent; there’s a lot recycled perhaps, but I never really minded.  The film was crafted well enough that it felt like homage instead of copy, and that’s not easy to pull off.  Sam Hargrave directs for the first time, but he’s an experienced stunt coordinator, and he’s worked well with Hemsworth before, which all shows, because Tyler’s fight scenes are where the magic happens.  They’re pretty spectacular, the hand-to-hand-combat sequences, the SWAT team maneuvers, the car chases; it’s all super cool.  And done so well, which is the real key, done so that they seem natural and not stupid, smooth and even one-shot, not jumpy and CGI-ed to death.  Hemsworth is so cool, Golshifteh Farahani has a small role but a special quality, the end will give you the feels, and if there are a few too many touchy flashbacks to Tyler’s past we can forgive them, because the film as a whole rocks.