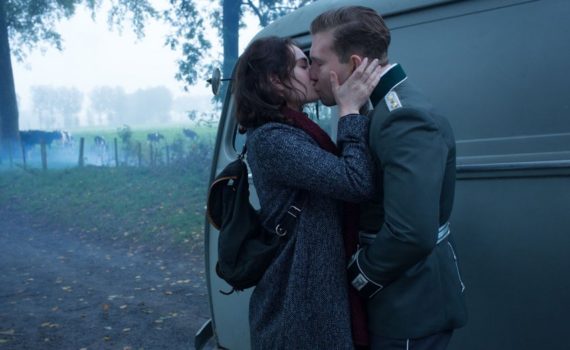 First-time director David Leveaux swings for the fences, if you’ll pardon the expression, with The Exception, a dramatization of history that features both eye-catching talent and cringe-worthy performances.  Well, actually, only one cringe-worthy performance, but that one is enough to derail the locomotive that is this picture, considering that it comes from the below-average talent of the main character of the film.  The Exception is a bit of war-time fantasy, a romance set among the bare bones of a true story, a movie based upon a novel that gives drama to the last days of a King.  Doesn’t sound too bad, isn’t too bad, but the final product is not the concise feature we would hope for.

Kaiser Wilhelm II, former King of Prussia, has been in exile in the Netherlands since Germany’s defeat in WWI and his removal from the throne.  Now that the Nazi party has taken over and is marching upon Europe, Wilhelm hopes to be reinstated into the monarchy, though the supporters of the worker’s party may not be of the same mind.  Captain Stefan Brandt has been put in command of the Kaiser’s personal guard, tasked with the mission of keeping him safe, so that Hitler can use him as he sees fit.  But a British agent is in the area, possibly to assassinate the old King, and tensions are high.  When Brandt begins a relationship with a Jewish housemaid named Mieke, he finds himself in over his head in dangerous waters, where one wrong choice could mean death.

Leveaux’s direction succeeds fairly well, and the movie itself ends up as a job well done, if not anything that deserves a standing ovation.  This story, fictionalized as it is, will still fascinate those interested in WWII, as it still paints a very interesting picture of the new German regime pitted against the old.  So the context is there and the execution is OK, but the pieces are judged on their own, and some are better than others.  Plummer as Wilhelm was excellent, as was his wife, played by Janet McTeer, the perfect pair to show us ancient royalty fighting against a modern world.  Lily James was the real star though, and she chose to go down a path many young actresses have tested before, embracing nudity and an adult role to show that she has absolutely arrived in the spotlight.  To be fair, Courtney was nude as well, which was probably the high point of his performance.  He’s not a good actor, that’s plain, and he couldn’t do a German accent, if that’s what he was trying.  He, as the lead, brought down the film, the others tried their best to boost it back up, the result being an uneven story that had its moments, but overall won’t wow anyone watching with a critical eye.