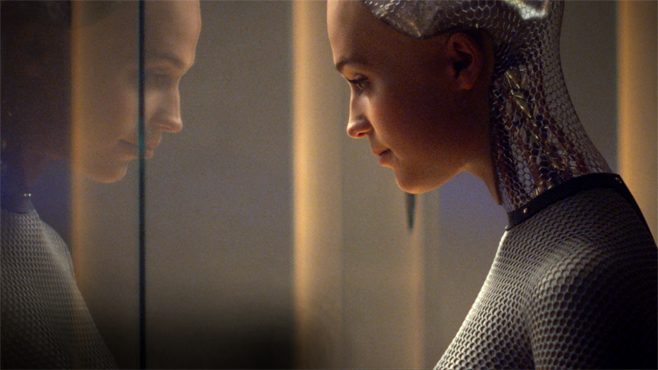 Alex Garland is a name we should keep an eye on.  Ex Machina might be his directorial debut, but it is far from his first stab at cinema.  He wrote the novel for The Beach, a film some people absolutely hate, mostly because of one scene, but I happen to think is great.  He also wrote the screenplay for 28 Days Later, a modern zombie classic to this day.  And he adapted the story for Never Let Me Go, an incredible, understated, and under-the-radar sci-fi film that I’ve never understood why more people didn’t see.  So Garland knows his way around good movies, although it must be stated, in fairness, that he also worked on Dredd and will be writing the screenplay for a Halo movie.  Hey, guy’s gotta eat, can’t blame him too much for taking the paycheck, especially when he turns around and delivers one of the best A.I. films that you’re ever likely to see.

Caleb has just won a contest.  As an employee at the world’s largest internet search engine company, Bluebook, he’s been selected to meet the corporation’s owner, Nathan, at his mountain retreat, spend the week there, and be a small part of a new technology.  Sounds fun, especially for a talented young programmer, since Nathan is a genius in the field, an unparalleled success in the industry.  So Caleb flies in a private helicopter, arrives at the woodsy home, enters an electronically advanced facility, meets Nathan, and is ready to get to work.  But what exactly is the work?  Nathan tells Caleb that he’ll be needed to administer a Turing test, to work with a robot’s mind, attempting to tell the difference between humanity & machinery.  But there’s so much more to the week in the underground research lab, so much more to the story of this possible A.I., and so much Caleb can’t possibly understand. I recently watched The Machine, a 2013 film about a female robot and the men responsible for her existence.  It was only OK, just another cool idea that didn’t exactly come across the way its producers might have imagined it.  Ex Machina, though it has a similar title & topic, could not have been more different.  First, the god-like inferences that the title gives, going all the way back to Greek tragedies, present the story in a completely new light, making the film less about technology and more about morality.  Like Her, the movie is personal to the core, based on sexuality & humanity more than it is on the subject of a completely free-thinking A.I., or even the should we/could we struggle that so many movies focus on.  Ex Machina is a simple story at its base, a look at the lives of three intersecting individuals and the struggle that naturally occurs when they occupy one small space with three very separate desires.

At first I was worried about Domhnall Gleeson, though I loved him in About Time and enjoyed him in Frank.  I didn’t want him to be overly dark, I didn’t want him hiding his Irish accent, and I wasn’t sure I wanted to see him in this light at all.  I needn’t have worried; he was phenomenal, and I won’t doubt the kid again.  Oscar Isaac, who I campaigned for after seeing Inside Llewyn Davis, was incredible as the twisted scientist, the villain so often, but always someone you understand only too well.  And Alicia Vikander, an unknown to me, could not possibly have played a living machine any better.  She was never either too realistic or too mechanical, always playing the part as a mix of two worlds, perfectly blending the concepts of logic & emotion.  Those were really the only characters in the film, and I couldn’t imagine one piece that I would have liked to have seen added.  The balance was amazing, the mood was terrific, the pace was exactly right, it had just a touch of comedy, and an ending that was exactly what I wanted.  For sci-fi buffs and fans of deep drama, this might be the best film of 2015. Gleeson is Irish – not British.
Also, he’s a 32 year old dude, rather than a “kid.”
All in all, phenomenal film, and a very poor review.

I stand corrected about his nationality, I was thinking of ‘About Time’. But the guy’s a relative young newcomer when it comes to American cinema, so “kid” it is.