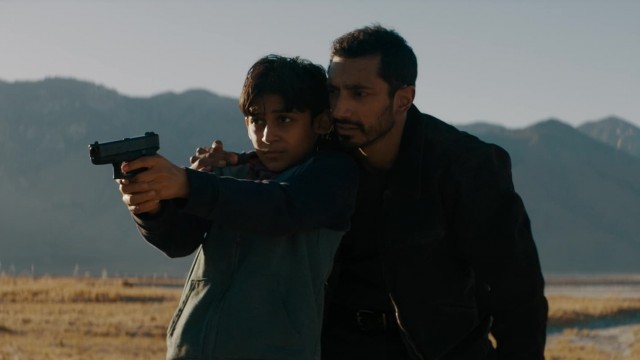 Encounter may have been falsely shelved, like a book someone decided not to borrow and didn’t make the effort to stick back where it belongs.  This film was advertised as sci-fi, as alien metaphor, as deeper than the fantasy, yes, but still as an “encounter” movie; I don’t think that was just me making a mistake or assumption.  If that was a trick, a red herring, then the joke is on the filmmaker because many who watch this film are not going to be pleasantly surprised.  There isn’t any depth here; this is a story about a man with mental problems and trauma having delusions and putting his family in jeopardy because of them.  And while that’s an interesting premise, like Take Shelter, that’s definitely not what I thought was coming our way, nor, in this case, what would have made for something good.

Malik is a marine veteran who spent time in prison and who is currently barraged by fears of alien parasites, hostile takeovers, and secret base camps.  In order to “save” his sons, who live with their mother, he scoops them up in the middle of the night and whisks them away to safety on a road trip that has no real destination.  At first, the boys are having fun with their strange, estranged father; Jay the elder wants desperately to love his dad, Bobby the younger looking forward to no rules and lots of sugar.  But the vacation soon turns bizarre as Malik’s delusions increase and his responses turn violent.  Jay will have to do the bravest thing he has ever done; stand up to his father, take care of his brother, and save himself from a situation that started out enjoyable but has quickly become deadly.

Riz Ahmed is a god among mortals when it comes to pulling off these disastrous, self-destructive, highly-emotional roles.  He knows exactly what to do, he has the skill to do it, and it seems that directors offer him the freedom to dive into the role very deeply, all the way to the dark, dark bottom.  But, as incredible as he is, Riz can only do so much; Sound of Metal gave him support and thus is a great film, Encounter does not do the same.  This isn’t sci-fi, it isn’t even ambiguous like Take Shelter, it’s just a kidnapping movie, and that’s not what we wanted.  It’s also extremely typical/standard/dumb when it comes to the rest of the plot, filling in holes with grotesque cop figures, pulling an ending out of its own ass that could not be more disappointing.  Top it off with a preposterously awful performance from Octavia Spencer out of nowhere, feeling like someone’s random next door neighbor was asked to fill in last minute, and you’ve got a movie that simply doesn’t work.  It wants to, we want it to, Riz can make magic, but the deck was stacked against him, and the most Encounter can muster is ‘fine’ and that’s only on account of its star.