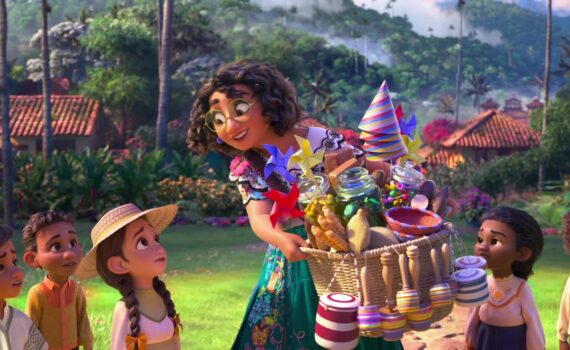 Unfortunately, Encanto is not enchanting; it’s a thin version of a dozen stories we’ve seen before, a hundred themes we’ve experienced before, and littered with a handful of very bad songs we’d swear we’ve heard before.  Directed by three people, written by six people (and probably copied from the same number of movies), Encanto is tracing paper laid over better, bolder things, with a few new ideas sprinkled so lightly on top they they fall off as soon as you give the thing a shake.  Not the best Disney has to offer from any angle you look at it, this movie would only get worse it you peered at it too closely, and that’s just sad.

The Madrigal family lives in the village of Encanto in Colombia, protected my mountains all around their little valley and bolstered by a magic that they hardly understand.  Many years before, a candle gave the family special protections from the outside world, and also special powers to use in aid of the villagers and their future generations.  Now, the Madrigals use their gifts to help the community and they are all very proud of their special magic; all except, Mirabel, the only Madrigal to not be given a power.  But when the family & their home begin to break apart, she may be the only one who can glue it back together again.

So many issues, so little time.  First, we are in the Lin-Manuel Miranda era of Disney, as opposed to the Alan Menken age, and that’s OK, that’s change, but I’m having a hard time accepting that basically every Disney film I see will be brought to us from Miranda’s point of view.  What’s worse, every song in Encanto sounds like it came straight from Hamilton, and while that’s a good show, it’s not nearly as good as most people think it is, so that’s a problem, hearing the same tunes copied over & over until it’s just insane.  Also, and simply, this story isn’t very good; powers that are never used, action that never takes place, conflicts that just dissipate, morals that are managed way too fast.  Literally almost nothing of interest happens at any point in the plot; it’s just one long life lesson filled with a few songs, and that’s not good enough.  A meld of Frozen and Coco, with Hamilton songs as the soundtrack, Encanto isn’t strong enough on its own to make much of an impressions.  Like Raya and the Last Dragon (which was at least exciting) it’s thin, it’s weak, it’s not endearing or engaging, and there’s a reason why other animated films, like Mitchells vs Machines and Luca, are the ones we’re still talking about, while this one quickly fades away.