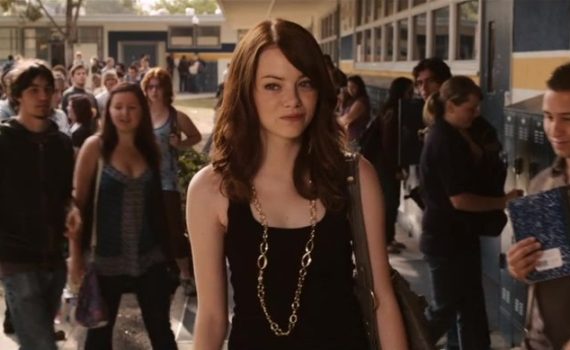 I’d like to open with the best thing about Easy A, and it’s not even close; the parents.  I don’t know if I’ve ever seen a duo portrayed with so much love and humor at the same time, like I wanted to be them, to be near them, for them to be my parents, and for them to be in a movie of their own.  Stanley Tucci & Patricia Clarkson deserve all the awards for being all that parents can be and all that we want them to be: funny, caring, breezy, concerned when it’s needed, awkward in just the right ways.  I don’t know, they were amazing, it’s the only true reason to watch this film, but it’s strong enough for me to recommend that you at least see them shine, because it’s something special.

Olive is a nobody at school; she’s quick as a whip, but not so great about making connections with other kids.  She has friends, sure, but she doesn’t date, she’s kind of invisible, and it bugs her that she’s not more approachable.  When she tells her bff a small lie and it gets out, things will change, and at first for the better, but ultimately to her detriment.  Well, it’s not a small lie really; she says she had sex, for the first time,with a college guy, and somehow the story gets blown way out of proportion, making Olive, suddenly, the slut of the school.  Now boys are asking her to make up more lies so that they can be popular like she seems to be, which is fun at first, but not in the long run.  Respect is earned but it’s also lost, and Olive’s goals aren’t to be an imaginary whore, they’re to find a great guy who likes her for who she is, not for the harlot she pretends to be.

Apart from the parents, who were perfect comedically and absolute angels parent-wise, Easy A is just OK.  It’s a teen romp/coming of age/rom com/life lesson that we’ve seen a hundred times before, and it’s nowhere near as interesting as the movies it references.  It’s flippant, it’s predictable, it’s average, which shouldn’t come as a surprise, but some consider it multiple steps above the norm, and I’m here to say that it isn’t, or maybe just one small step.  It does boast both Tucci & Clarkson, as well as Emma Stone, who we all can’t help but love, and she pulls off the role well, since it’s all she was good at, really, this kind of character, until she grew up, stepped out, and showed us she was something more.  I like her, she carries the story, at least as far as it can go, and the rest of the cast is pretty fun: Amanda Bynes, Thomas Hayden Church, Lisa Kudrow, Malcolm McDowell, Fred Armisen.  The boys, the loves, the morals; those were all silly, and brought down what maybe had the potential to be game-changing, but settled for cheaply entertaining instead.