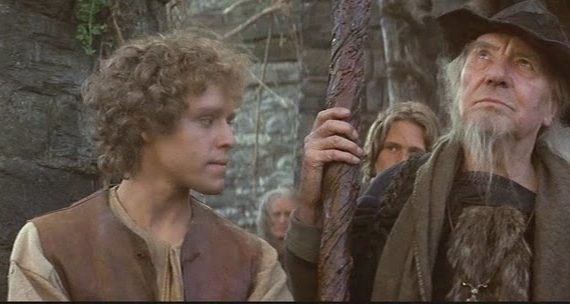 Dragonslayer is more Ladyhawke than Beastmaster, and that makes all the difference.  It was released in 1981, so it’s a frontrunner of the cheesy fantasy genre than dominated the decade, and which I happen to love, but it also missed several marks, in part perhaps because it didn’t have many others to draw from.  Or perhaps, looking back, the sillier movies of that style work better than the ones that took themselves too seriously; watching now, what we really want are spells, warriors, biceps, boobs, and all the trashy content that b-movies can deliver so well and so wonderfully.  This film isn’t exactly “b”; it’s more an attempt at something that it was never going to achieve, and therefore becomes one of the genre that you can definitely miss.

Galen is a young wizarding apprentice learning from an aged master, and there’s a real chance he’ll turn into a great magician in the future, if he continues to study.  One day, a band of men come from a nearby kingdom to request the wizard’s aid in defeating a dragon.  Their land has been the dragon’s territory for years, and their king has decided to sacrifice a virgin girl to the monster twice a year, for which the dragon remains pacified.  But when the wizard sets out on the journey to help the villagers, he dies, leaving Galen to take up the quest.  He’ll have to use his wits as well as his magic, and he’ll need the aid of the brave Valerian, if he’s to destroy the threat before he is destroyed himself.

If they had just made Dragonslayer more of a comedy I think it might have worked; as it is the entire thing fails miserably.  It’s not funny or even slightly over-the-top, it’s not that fun romp that we’ve come to expect, that enjoyable experience that’s silly but so entertaining.  This was one of the first, it didn’t have that formula perhaps, and maybe it was better at the time, I don’t know, I was -2, but watching it back it simply doesn’t carry the same weight as some that have the unique quality to become cult classics.  I expected MacNicol to be better, or at least a little goofier, since that became his persona; I guess he wasn’t there yet.  He just can’t lead the cast, the plot is stupid, not enough really happens, and there’s nothing to really hold on to or hold up, to declare a success, not even the smallest pieces.  I do see a little Lord of the Rings in it, so maybe it borrowed from Tolkien, and maybe Peter Jackson borrowed from it, but even that connection didn’t make a difference; this film can go ahead and be forgotten.