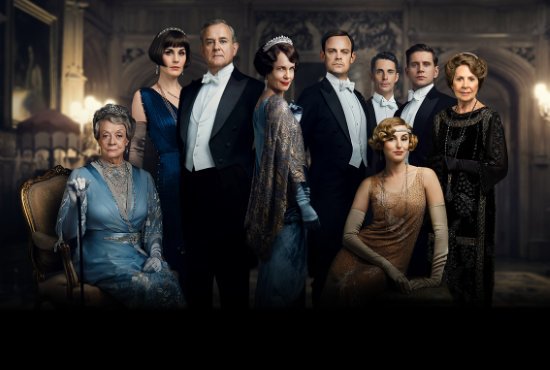 Downton Abbey is the best drama television has ever gifted us, six seasons of touching storyline that I will never, ever forget.  I can remember the first time I sat down to watch, how drawn in I was immediately, how affected I was by each up & down, how much I never wanted it to end.  But nothing gold can stay, and Downton didn’t wear out its welcome, leaving us wanting more, like any good entertainer knows to do.  And now we’ve been rewarded with the bonus material we didn’t even know we deserved, a film version of the show and a final chapter in the book of the Crawley family, and those downstairs who keep their daily lives spinning. This is fan service at its very best, its most pure, a hand-wrapped gift to devotees that won’t be understood by anyone else, a movie that’s somehow more than that, and a perfect way to say goodbye.

Five years since the last time we looked in on them, the Crawleys and their servants continue their routines at Downton Abbey, while navigating the bumpy road of modernity and inevitable change.  Mary added a daughter to her family, Edith is the lady of an important household, Barrow is the butler in charge; everyone is growing up so fast.  And an unexpected event is about to come to their doorstep, keeping all on their toes even more diligently; the King & Queen are on their way for a visit.  That’s right, royalty at Downton, and the entire house is in a bustle over the historic event.  Tom has a special role to play in helping things go off without a hitch, Robert might be cut out of an inheritance, Granny has some news to share, the staff plot a mini-rebellion; never a dull moment in Yorkshire, not at Downton, where high drama is always in fashion. There’s no explaining it; if you don’t love the show you won’t get the movie, and if you haven’t even watched the show I don’t know how to convince you that it’s the best you’ll ever see.  There have been some amazing and groundbreaking comedies: Friends and The Office come to mind.  But never has an episodic drama made this big an impact while also holding to this high a standard.  It’s a quality show, tremendously so, and it watches like an unfolding of real life, a story of people you already care for and want to watch succeed.  The deaths and downfalls are tragic, the weddings and bright moments are magic; Downton Abbey is something that everyone should experience.  And now we get more than we bargained for; a film version of the show that was created to make a quick buck, I’m sure, but was also constructed well-enough to stand alone as lovely fan fiction against which I have no complaints.

It really is like a special episode, like a season or series finale, and fans will appreciate the continuity in plot, even while audiences coming in blind will feel lost.  This film wasn’t made to pique interest, it was made for those who already watched, and in that way I fully appreciate the bows they tied on some of my favorite storylines.  But it’s also a solid stand-alone movie, from the acting to the costumes, from the music to the delivery of each scene; Julian Fellowes’ talent is on full display here, with Engler as a partner and the cast as pillars holding up what has deservedly become a theatrical institution.  The fan service element hit all the marks, gave me all the feels, and I couldn’t have left happier; I would have liked to have seen Rose, but I’m sure she’s off doing amazing things.  The extra characters are strong, the run time is perfect, it ended so well, and I could watch both the entire series & the film send off again right now without a moment of boredom.  Again, watch the show, fall in love, and then come back to the movie, because otherwise you won’t appreciate what you’re seeing.  But when you do all that, you’re welcome to join the club and sing Downton‘s praises; it surely deserves them.