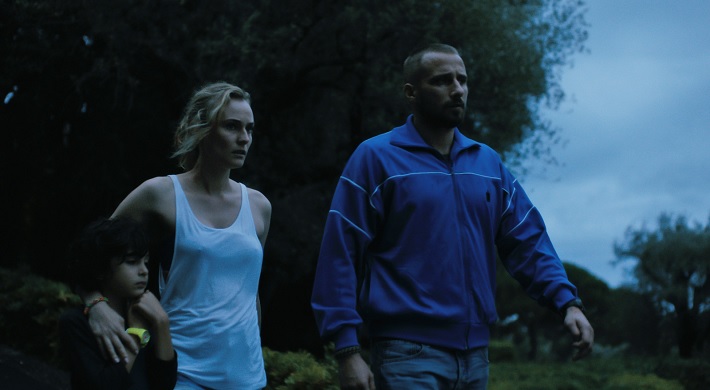 Matthias Schoenaerts is a fascinating actor who, apparently, can do just about anything.  The villain, the love interest, the hero; this Belgian counter-culture heartthrob can play any part, but still cruises under the American radar.  Black Book, Rust and Bone, Blood Ties, The Drop, A Little Chaos, The Loft, Suite Française, Far from the Madding Crowd, The Danish Girl, A Bigger Splash; you don’t appear in this many solid films without reason.  It’s time we started taking notice of a man who is not only broodingly handsome, but has the talent to back it up, who can do romances, period pieces, and deep modern dramas with equal ease.  Once American audiences except him as a leading man, there’s no ceiling to what he can achieve.

Returning from war in Afghanistan back to his native France, Vincent deals with hallucinations, nightmares, nosebleeds, phantom noises, and the inability to accept that his tour of duty might be over permanently.  He struggles to find a place to fit while waiting for his imagined deployment, with no family or connections to rely upon.  He does secure a job however, as part of a security team for a large mansion in the south owned by a mysterious Lebanese businessman.  When Mr. Whalid leaves for the weekend, he hires Vincent to stay on as bodyguard to his wife Jessie and his son Ali.  But their idyllic few days at the beach are shattered by Vincent’s paranoia, Whalid’s shady dealings, and threats to the family, either real or imagined.

A very quiet thriller, Disorder is part subtle love story, part PTSD study, and part typical page-turner.  There are elements from multiple genres weaved together to create this film, the result being one of the cooler & more complex action/drama/mysteries you’ll see this year or any other.  The story is simple, the movie quick, but its points are made clearly, its messages delivered with no minced words.  In fact, Schoenaerts spends most of the time darky introspective, playing Vincent with a dangerous silence that only highlights his personal problems and the unique complications of the family he is protecting.  But he does it in such a way that, as long as you are patient, will draw you in before you even realize that it’s happening.  Kruger is solid as well, and the pair of them craft a chemistry that’s almost completely nonphysical, that’s all told through glances & nuances.  This is a film that requires some close attention and a little bit of work, but one that rewards you with great acting, an impressive mood, and an overall top-notch product.