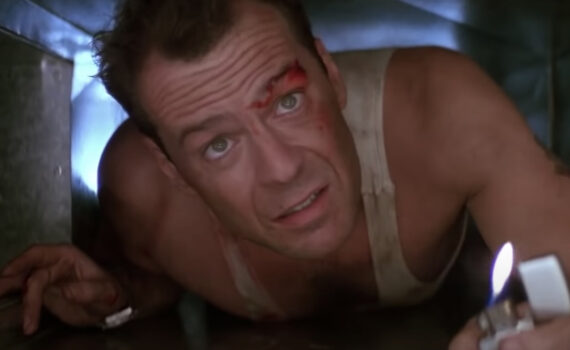 Time to review Joey & Chandler’s favorite movie; DIE HARD!  It’s been years since I’ve visited this Christmas classic, and Christmas classic it is, if a very bizarre one.  It’s action, it’s comedy, it’s holidays in LA, which are always weird; Die Hard is a lot of things rolled into one, but it’s always a good time had by all.  This whack-a-doo wonderland never takes itself seriously, and that’s its saving grace, that audiences are only asked to have a great time, a few laughs, cringe a little, shout out loud, and come away remembering something wild.

John McClain, a New York cop through and through, is visiting his family in LA, where his wife took a high-power job and moved their family.  Things are strained, there’s doubt in the air, but John comes for Christmas with the hope of fixing the mess.  But he’s about to have another problem; terrorists take over his wife’s office building, and thus her office party, and John may be the only guest who they haven’t accounted for.  With his background and his skills, he will now attempt to take down the bad guys, who are much more devious and prepared than they first appear to be.

First of all; yes this is a Christmas movie.  It takes place at Christmas, it has Christmas music, it’s about family and saving the day, it just happens not to be cold.  Secondly, it’s about as good an action flick as you are likely to watch.  It’s silly, it’s fun, it has laughs, big moments, a nice rhythm, and you will have fun, I almost guarantee it.  Willis is no actor, not really, but he is a cool tough guy, and that works well here, as he’s blazing his way to glory and saving the populace.  Add in Alan Rickman as one of the most iconic and evil villains on the big screen, and what you’ve got is gold, which is why Die Hard has yet to be forgotten.