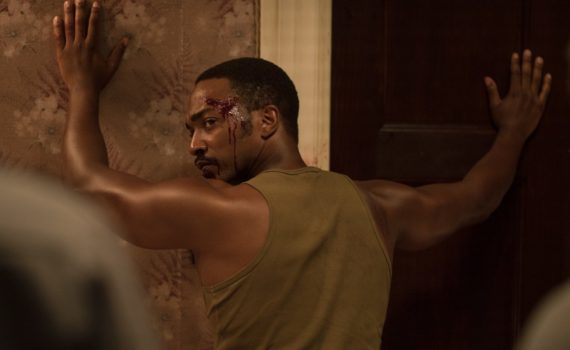 Even Kathryn Bigelow’s best movies aren’t great movies, and the time is long past for us to stop heralding her as the preeminent female director.  We have been moving toward equality when it comes to women in Hollywood, especially those behind the camera, but it has been a slow process that has had to climb over countless chauvinists along the way.  Those of us who applaud this progress are sometimes too quick to support anyone who represents it, holding back our natural, critical opinions because we don’t want to be part of the problem.  But talent is talent, and if I’m judging Bigelow solely as a filmmaker, I don’t think she’s nearly as good as she’s given credit for.  Point Break, The Weight of Water, K-19, The Hurt Locker, Zero Dark Thirty; the last two are considered excellent, but I have to say they clearly are not, and neither is she.

Detroit, Michigan, summer of 1967.  Race relations, especially between black citizens and white cops, are at an all-time high, finally boiling over in a series of riots that led to National Guardsmen, curfews implemented, and hundreds of arrests.  Black neighborhoods were literal war zones, with freelancing cops dealing out their own interpretation of justice.  At the Algiers Motel on July 25th, police responded to what they thought was a sniper shooting, but may have simply been a toy gun fired at friends.  In this escalated environment, police overreacted, charging into the motel and searching room to room.  Three police officers took it upon themselves to interrogate potential witnesses to the shooting, lining them up in a hallway and threatening their lives.  They began playing a “death game”, pretending to shoot the suspects one at a time behind closed doors, allowing their friends to think they were dead.  This twisted game led to multiple actual deaths and a court case that perfectly exemplified the injustice of a criminal system that allowed cops to get away with literal murder, simply because those who died were born black and therefore assumed guilty.

I simply don’t understand the love of Bigelow’s films; either her importance as a female director is being placed higher than her actual abilities or I’m on a completely different taste plane, because I don’t see it.  Her stories are long-winded, heavy-handed, over-dramatic, and laden with flaws, from the acting & the dialogue to the pacing & the flow.  Detroit is simply a prime example of her style, and it’s a style that I simply don’t like.  It’s as if it wasn’t edited, which is the main problem with her movies, as if no one was allowed to cut any material because it just seemed too important.  There’s no arguing that this story itself is important, that we need to see it no matter how uncomfortable it makes us, but I wish someone with deft ability had taken hold of it instead.  As it stands, Detroit is clunky and long, which is disappointing given the amazing time period that it captures and the relevance of its plot.  No single actor elevated the film either, which was too bad, but that’s another Bigelow fault, bad casting.  The hotel guests were amateur, the cops were awkward, and when Jim Halpert walked in I literally laughed out loud.  This true tale deserved something better, and the reality of what happened is the only reason that I appreciated watching this film.  Well, that and John Boyega, who I thought was a weak link in The Force Awakens but who shined here.  I can’t steer you away from this film; it’s important, shocking, and doesn’t hold back, I only wish it had been picked up by someone else.