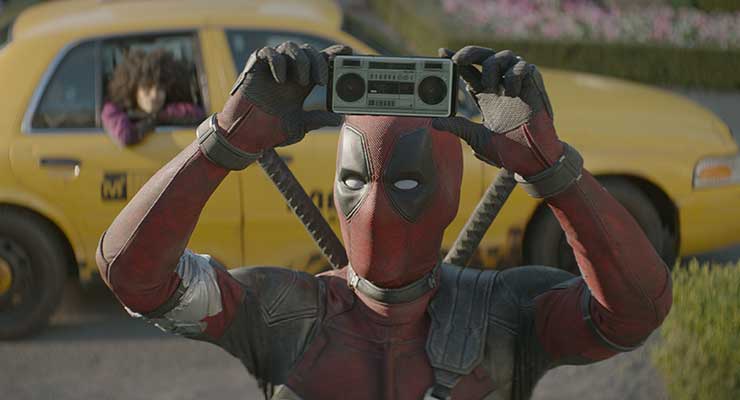 Deadpool was a big deal, in that it knocked some barriers down with a few, well-placed f-bombs and opened up a genre we didn’t even know we could have.  Amidst the Marvel uprising (of which I’ll admit I was pretty skeptical, never really being a comic book fan until these movies became better and better and eventually coerced us into fandom), Deadpool was a rogue warrior, kind of tying in with some others, pushing the comedy to a sinister place, owning its R rating, breaking the fourth wall, completely shocking the senses in very good way.  GOTG had been funny, Logan would go dark, but Deadpool was an original through and through, and it more than deserved a sequel.  So here we are with the second installment, and while it’s not in improvement on the first, it’s still an action-packed middle finger to the industry, while still somehow working as an early-summer blockbuster.

Spoiler Alert if you haven’t seen the beginning of this franchise; Wade and Vanessa are together, they are happy, Deadpool is successfully killing bad guys left and right, and all is well.  Until one killer who got away comes back for revenge, and destroys Wade’s whole world.  Depressed and in pieces (literally), DP is saved by Colossus and persuaded to join the X-Men.  His first mission; pacify a mutant teenager named Firefist who wants the entire world to burn; and here’s where it gets complicated.  Deadpool can’t stop thinking about Vanessa, Firefist is out of control, the X-Men want one thing, the newly-formed X-Force wants another, and then this angry guy named Cable shows up from the future for revenge, claiming that he’s got to kill the kid to stop him from turning into an evil psycho.  Just another day in the life of the Merc with the Mouth. I really enjoyed the first film, and it’s not really hard to explain why.  It was funny, it went too far, it pushed buttons, it didn’t care, it shed the juvenile, and it still delivered X-Men action from a badass character in a way that audiences didn’t know they were dying to see.  That’s just it; we’ve been waiting for an R rated comic book comedy, we just didn’t know it, but somehow Deadpool did.  The second follows in the footsteps of its predecessor fairly well, with some slo-mo action, a ton of asides, barrels of blood, wisecracks, asscracks, ass jokes; I could go on.  But if you’ve seen the original, you know what to expect from the sequel, and I can’t imagine any fan coming out of the theatre disappointed.

I wish I could end the critique there, but not everything was picture perfect.  It might have been impossible to top the first, especially because it was so entertainingly shocking, but the second just can’t quite compare, and although that’s not its fault, it’s still something that it has to accept.  Wade was cool, Dopinder cracks me up, Cable was awesome, and the surprising guest star near the end was a ton of fun.  But I didn’t really like the X-Force, that was silly, Domino was only OK, and a quick word about Julian Dennison as Firefist, because something particular really bothered me.  I’ve seen Hunt for the Wilderpeople, I loved it, but I don’t understand why they recycled some of the exact jokes from that movie into this one.  Ricky Baker has an obsession with Tupac, we know that if we watched Taika Waititi’s flick, but if the references in this film were meant as homage, they sure felt lifted instead.  Just a small thing maybe, but it made Firefist seem like a leftover character to me, not something fresh.  The entire feature comes across as a little stale, a little done, because it has been, and that’s just something audiences have to deal with.  It shouldn’t stop them from having a good time though, not at all, because there’s a lot here to enjoy, and when we get Deadpool 3 and X-Force, we’ll be sure to dig those too.