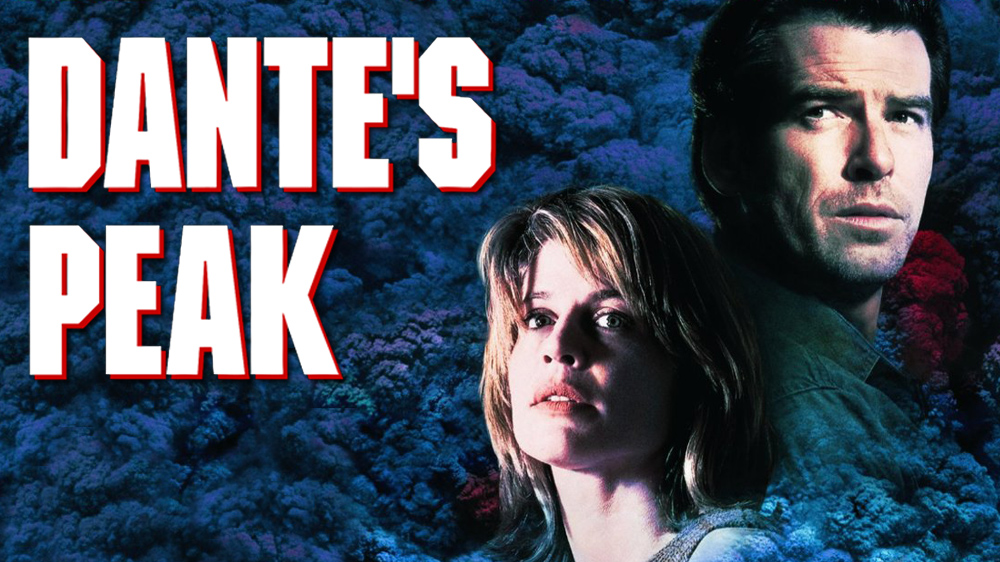 Dante’s Peak has been a closet favorite of mine since I was a kid; I had a thing for disaster movies, don’t be too hard on me.  And I’ve always thought of it as a sort of standard for the genre, an over-the-top action extravaganza classic that a lot of others have followed behind.  Of course, Big Disaster isn’t a brand new style, they did ’em solid in the 70s too, The Poseidon Adventure comes to mind, so perhaps it’s more that my young mind thought Pierce Brosnan saving people from a volcano was simply bad ass.  But watching it back as an adult reveals a lot of the ridiculous underlying and all-too-obvious problems that keep this fun movie from being a good film; honestly, if I’m forgetting my loyalty, it’s downright terrible.

Volcanologist Harry Dalton is called to Dante’s Peak, Washington, the second best place in America to raise a family, to investigate some tectonic activity around the town’s namesake mountain.  The beast is dormant, but is showing signs of waking up, though Harry has trouble convincing anyone else of this fact.  The city council doesn’t want to freak people out, the other geologists don’t want to cause a panic, and the only person who seems to believe Dalton’s expert opinion is the town’s mayor, the lovely (and single) Rachel Wando.  But soon everyone gets in line and starts believing, as symptoms of an eruption become all too clear.  Can everyone get out in time, or will ash bury another lovely hamlet settled too near a sleeping giant?

Dante’s Peak is at once fabulous and horrendous, which makes it really hard to review.  And then there’s the added problem of my youthful love for the film, coupled with my more-critical adult perspective.  Suffice it to say, my ultimate rating of the movie falls somewhere in the middle, and I can’t blame anyone for either loving or hating what is inarguably a spectacle worth seeing.  The acting is on par with the worst you’ve ever seen, especially from Hamilton and her little kids, but extended to most everyone other than Brosnan, who at least was his typical cool self.  And the action was often obviously done in miniature, which is kind of throwback, but also really awful.  But you can’t deny the excitement surrounding a volcano blowing up, a town being destroyed, and folk running for their lives; that kind of entertainment can only be found in this genre, and that’s why we always come back for more, even if we know the real quality of the product will inevitably be poor bordering on pathetic.