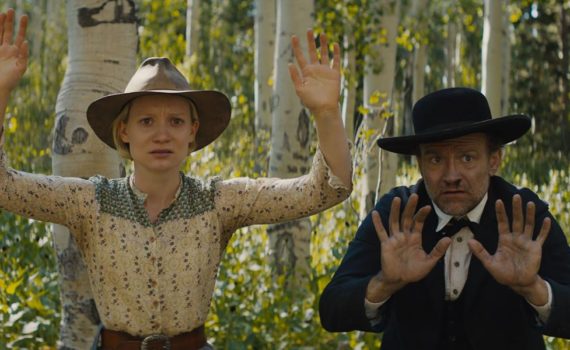 Damsel DVDs are extremely cheap on Amazon right now, especially for a brand new movie, and there’s a reason.  Sometimes I see extremely overpriced movies that were awful and I think “dear god who’s paying that much”, and sometimes I see markdowns because it’s obvious that film is terrible and it’s like “oh yeah that makes sense”.  Damsel is an attempt at a comedic Western with an existential flare that fails when looked at from any angle, and especially when experienced firsthand.  I don’t exactly regret watching it, as bad as it was, because at the very least I can help people both make an important life decision and not waste their money.

Samuel Alabaster is bound and determined to marry the beautiful Penelope, and he’s gone to great lengths to make it happen.  He’s traveled far, made himself presentable, bought his bride-to-be a guitar as a wedding present, and is even accompanied by a miniature horse named Butterscotch because Penelope once told him that she thinks they’re cute.  Samuel hires a Parson, who isn’t really a Parson, tell him that his fiance has been kidnapped, which isn’t exactly true, and the pair of them head out through the western wilderness to save the day.  Only Samuel is an idiot, Penelope doesn’t need saved, and everyone’s probably going to die because some people only make bad life decisions.

Damsel is like all the worst parts of Buster Scruggs formed into a feature film, or perhaps The Sisters Brothers if the comedy had taken over the film itself and made the directors act instead of doing their jobs.  Oh wait; they chose to do that themselves, and David Zellner is the real star of the film, for some moronic, unknowable reason.  I really like Robert Pattinson, he’s extremely talented, but he isn’t the lead actor in this movie, that’s simply a trick to get us to watch, and it might be the most disappointing thing about this colossal disappointment of a film.  David’s brother Nathan joins in on the cluster, Wasikowska has perhaps never been worse or cast less appropriately, every joke appears dead on arrival, and the darkness that is supposed to offset it just seems juvenile and pitiful, never as deep and unique as was intended.  I can only imagine that Damsel was meant to be something completely different from what we just saw, because while I get that strange Westerns are in style right now, this could not have been the product meant to be delivered, unless someone has seriously bad taste.