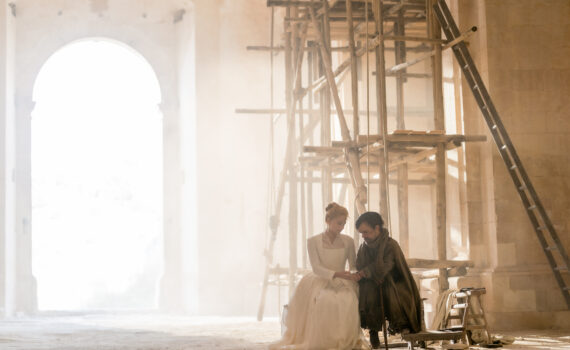 Had Cyrano had no music whatsoever, hadn’t, in fact, been a musical at all, I might have declared it one of the best films of the year.  This musical adaptation of a Broadway musical (which is itself adapted from a play which was adapted from a play; confused yet?) is a triumphant movie from any angle, but not very good vocal theatre.  Does that count as too big a strike to overcome, since the film claims to be a musical and yet fails at musicality?  Maybe, but don’t judge the songs too harshly; they are performed by such earnest actors that they, at times, fail to be important, succeeding only in distracting us from what it otherwise spectacular cinema.

The tale of Cyrano de Bergerac is as classic as love itself; romance in the face of unbeatable odds.  Cyrano is a soldier, a warrior, a killer for his King, but more than that he is a poet, a writer, a wordsmith with the skill to break your heart or make your dreams.  All his life he has loved the fair Roxanne, who is penniless and must marry the dreaded Duke for his money, though she loathes him.  But Cyrano dare not speak; he is small, he thinks he is ugly, and he knows that he is not worthy of her affections.  To make matters worse, Roxanne falls in love with a young solider named Christian, who loves her back more than words can say, literally.  Our hero must speak for Christian in letters to Roxanne, all the while pining for her himself, and knowing that these two beautiful people were meant for each other, just as he was meant to be their bridge.

Cyrano really is one of the best films of the year; engaging, endearing, entertaining, enthralling, and displayed to us with an art, grace, and lavish excellence that can only be found in the very best period pieces.  The actors leave it all on the stage, with sucht honest and loving performances that your breath is near taken away.  Dinklage could win the Oscar, Bennett has never been better, and audiences will swoon for this star-crossed love, even as they know the story from many times before.  Where the movie fails is in its adaptation of the play; not in staging, which is great, not in production, which is opulent, but in music, which simply slumps.  These are not high quality songs, not at all, and while I give a pass to the vocals (which are forgivable, and relateably unpolished & tender), I cannot forgive the music & lyrics, which are basic, uninspired, and not befitting Broadway.  It’s not that I didn’t like the music, I liked it fine, but all finesse was missing, and so was all genius, when musicals dripping with talent are what we’ve come to expect.  Watch Cyrano with an open heart and it will fill you up; let the music pass by you like wind and it will hardly bother you.