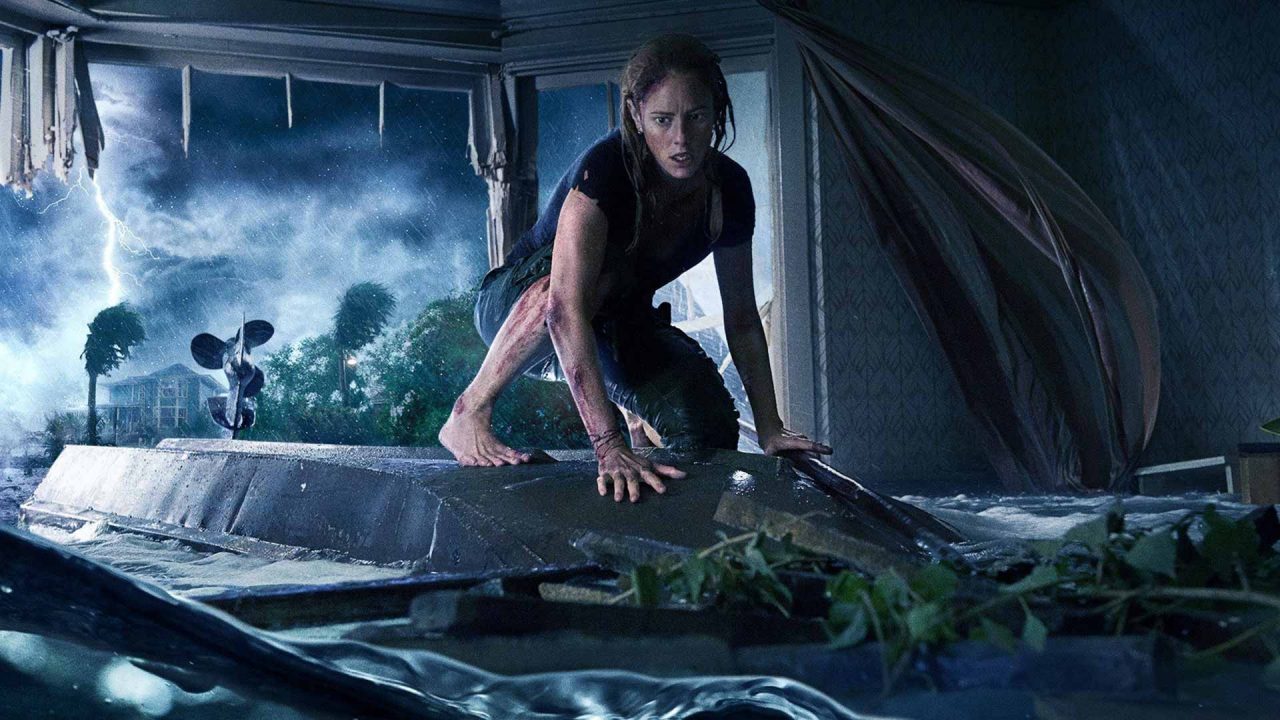 The creature feature genre took a big hit with the popularity of Sharknado, because even though we watched for fun and you’d think no press is bad press, our collective opinion of this horror subgroup definitely took a downhill turn.  Monster flicks are part of our cinematic history, we need them, we love them, we like fantastic and realistic creatures alike, but the genre is also precarious, we can’t have it tipped toward stupid too much or we’ll start looking elsewhere for entertainment.  That’s why Crawl is important, even if it’s, at the same time, not too good; we need solid attempts at critter terror.  And that’s what this flick is, a scare-the-audience-with-big-bites thrill ride, giving us exactly what we desire (and asking us not to mind the acting quality).

A massive hurricane is approaching the swamps of the Sunshine State and residents beware.  Most have evacuated, but not Haley, who is a student at the University of Florida in Gainesville, because her dad isn’t answering his cell phone, and he lives right in the path of the storm.  Haley is a competitive swimmer, her dad was once her coach, but their relationship has been strained by the parents splitting up, with blame being thrown around from all sides.  But this is her father, she’s gotta make sure he’s safe, so down into the lowlands she goes.  She finds him trapped in their old house in a crawl space, with the hurricane pouring water in on them from all around, and something swimming to and fro looking for a meal.  It’s gators, and not just one, unfriendly predators cruising for a meal, trapping father and daughter as the storm tears their hopes of survival apart. I do think that Crawl is a nice reminder to audiences that creature features are a part of our past, and can be a part of our horror future, as long as they are done right.  For the most part, this film fits the bill, and does the genre justice as far as thrills and chills are concerned.  There’s a lot of blood, a lot of torn limbs, and it’s hard to watch, but in a good way, in a way that’s one step up from b-movie gross out but still slightly over the top.  You will feel the crunch, believe that, and you will have a hard time putting your toes in the water for a while after watching; who knows what could be waiting down there where you can’t see.  The movie handles the action well, you root for the characters, the gators aren’t overly anthropomorphized, and although everything is happening underneath one house, there is enough movement (and the run time is short enough) that you will never feel restless.

But that’s not to say that Crawl was the perfect vehicle for a style I enjoy, not at all, it had some glaring issues.  Or maybe I should say ‘issue’ because there was really only one; the acting.  The acting was so terrible, so completely ludicrous, that I’m concerned for the sanity of whoever made the decision to go ahead with these actors and thought the product they were watching through the camera was top stuff.  I don’t mean that horror needs Daniel Day-Lewis to work, not at all, the genre has enough to give us that we don’t need a-list stars to deliver the lines while the blood spouts.  But god, someone better as the lead would have made a world of difference, and we might be having an It Follows conversation right now.  Scodelario was pathetic, so terrible, and Pepper wasn’t much of an improvement, their conversations forced and idiotic.  The swimmer storyline was dumb, the family dynamic was sappy, I would rather have had a stranger helping a stranger, the heroine working through her issues internally while she fought for survival, that would have been cool.  Instead we got awesome, intense, balanced action chopped up by f-list acting, the result of which was a fine film that could have been so much more.