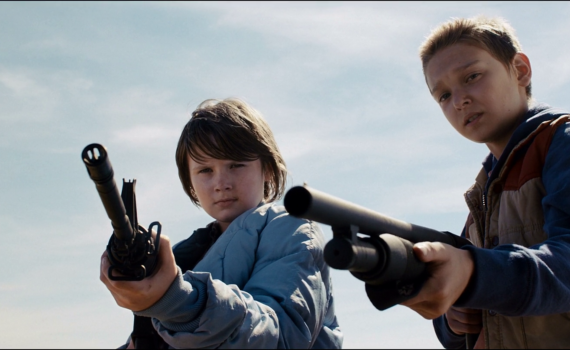 Off the top of my head, I’m not sure a movie was ever made better by having Kevin Bacon in it, and the same goes for Cop Car.  I even like the guy, I think he can be fun to watch, maybe Seven Degrees of Kevin Bacon has made him a living legend, but it’s not like we don’t know that he’s not a good actor, and perhaps it’s far past time we face that fact.  Cop Car is an incredible film with a realistic mood and two awesome young professionals …that is then messed up by adding Bacon.

Two young boys, Harrison and Travis, run away from their Colorado home and make for the woods.  They don’t have much of a plan, they’ve got one stick of beef jerky between them, and they’re none too bright, but life has worn them down already and so off into the wild blue yonder.  Along the way, the make an odd discovery; an abandoned cop car.  At first they’re apprehensive, but they are soon driving the cruiser over the prairies, carrying its guns around like lawmen of old.  But the car belongs to a rotten Sheriff, who wants it back, because it holds some real secrets and some living evidence.

Everything with the two kids is magic; everything with Kevin Bacon is a waste of time.  I’m not saying he’s the world’s worst actor, he’s just not the caliber that elevates, and sometimes, like here, he can even bring the mood down with his mediocre mode.  Were I the director, I would have focused on the kids entirely, and perhaps presented the cop as a shadowy figure, a man behind glasses, a presence more than a …Kevin.  As it was, I thought the end was far inferior to the beginning, middle, and overall potential of what was still a pretty marvelous movie.