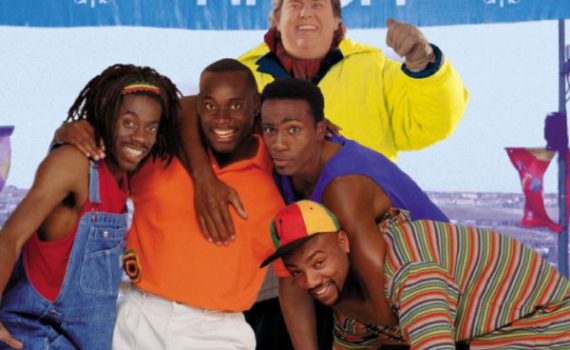 When I was 10 years old, Cool Runnings was a big deal.  Now that my kids are around that age, I thought it was a good time for a revisit, even knowing that the potential for a letdown was high.  All those 90s sports movies were fun but pretty poorly made, but we honestly didn’t care, we liked them anyway, and we’ll show them to our kids anyway too, because we doubt they care any more than we did.  Mighty Ducks, Rookie of the Year, Little Giants; you know the drill (although those movies were about children, Cool Runnings is in the roughly the same genre, even though it’s adults and a semi-true story), and you know what to expect.  Predictable and silly but still loads of fun, Cool Runnings should only be judged by its heart, and that’s pretty huge.

An Olympic hopeful from Jamaica just knows that he’s destined for big things; his father was an Olympian, he’s the fastest man on the island, and the world is his oyster.  When things don’t go as planned, he’ll have to find another way to compete on the global stage, and that way just might be bobsledding.  A screwed up ex-sledder named Irv used to have this wacky idea, that a group of sprinters could make the perfect bobsledding team, which is exactly what four young men from Jamaica want to try, even though their country has never competed in that event.  But there’s a first time for everything, and Jamaica is about to have a bobsled team.

This is a true story, at least partially, and the one thing it has going for it is a heart that makes audiences want to root, watch, and dream.  We loved it when we were young because it was novel, sure, but also because it was positive, it was hopeful, and it had an underdog mentality that is generally very attractive.  That the film isn’t great only matters a certain amount, because we never expected it to be and we don’t think it will be now, even as we show it to our kids.  It’s more fun than strong, and that’s OK, as long as you watch it with an eye toward the message, now the means.  The acting is bad, John Candy is particularly & shockingly terrible, I’m not sure how culturally appropriate it would be if it were released today, but I hold to the fact that there’s a nice, solid, heartfelt point being made here, if somewhat amateurishly.