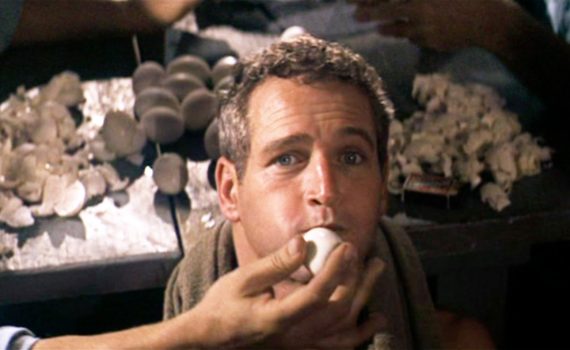 “Sometimes nothin’ can be a real cool hand.”  So says Luke, Cool Hand Luke, with a line that would define a film, not just because it gave the hero his nickname, but because it summarized the entire essence of the picture.  Sometimes you are dealt nothing, but when you have nothing to lose, you are finally free to do whatever you choose.  That might seem like a strange theme to be placed inside the barbed wire walls of a prison, but perhaps no place better exemplifies both the feelings of desperate hopelessness and of astounding faith.  Shawshank Redemption would perfect the plot in later years, but Cool Hank Luke experimented with the idea and gave us a character we’ll never forget.  For that, we hold it among the classics, and very few films in cinematic history deserve the recognition more.

Busted for destroying municipal property and disorderly conduct (aka breaking parking meters while drunk, just for kicks), Luke Jackson is sentenced to two years in a Southern labor camp, becoming a part of the chain gang community overnight, a place where men go to work off their time along the highways and in the ditches.  Luke is a bird not meant to be caged, his song to the world is so sweet, and the rules of the camp begin to chafe him immediately.  Escape attempts are punished by leg irons, time in the Box, extended sentences, or a combination thereof, but Luke can’t drown out the Siren call of the open road.  For his refusal to conform and for his unbreakable spirit, the prison gang begin to love Luke, piling their own hopes on a man who seems above the law, who embodies all they wish they could be.

If you know the films of this time period, you will expect something slow and methodical, focused on atmosphere and content over speed and overwhelming action.  Cool Hand Luke delivers the best of what this era and this genre have to offer, a story like none other that takes its time to unfold.  The weight of the plot gets heavier and heavier as the characters get more and more desperate, and the conclusion is something you will never forget.  But there is also comedy sprinkled throughout, enough to keep audiences engaged when the going gets tough.  Nominated for four Academy Awards, this is a classic among classics, and it definitely deserves the spot.  Amazing music, an excellent locale, memorable characters, iconic scenes, and Paul Newman in his prime; what more could you ask for.  Cool Hand Luke is both a pillar at the base and a step toward modern masterpieces, with enough experimentation to impress but also a grounded firmness that you can sense from the very beginning.  You could watch this movie any number of times and still come away impressed; it has that much to offer and is that well-made, a spectacularly dramatic look at a life led freely, even while in bondage.