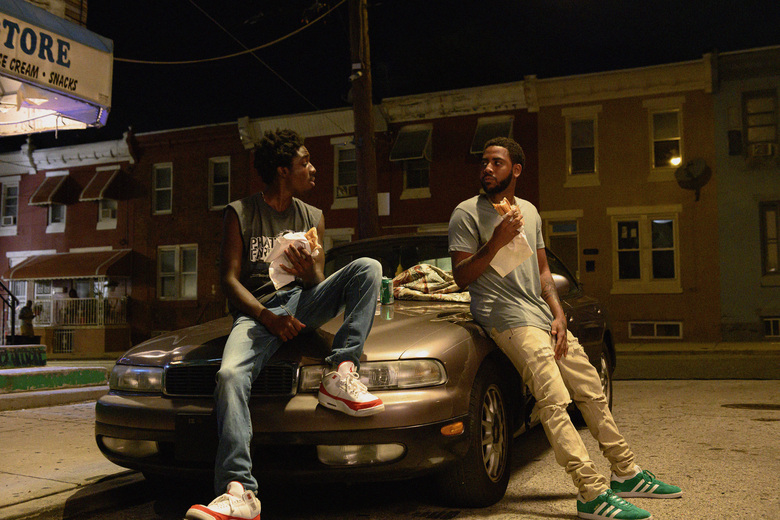 Nomadland 2.0?  Not so fast.  Concrete Cowboy might be an attempt in that same direction, telling us a story about real folks in a many that we can consume, but it’s not nearly up to the standard of a film that should win this year’s Best Picture.  CC will compete after 2021, but it won’t get a sniff of awards; almost everything done was something done wrong, and you’d think with a better movie to copy off of you could create something, well, better.  Want to hear the main problem and the most disturbing part of the film?  Idris Elba is barely in it.  Bold move putting one the world’s best actors in your movie as a main character and then refusing to actually feature them.  Bold.

Cole is a troubled young man from Detroit, and he’s just been kicked out of yet another school.  His mother, who has taken all she’s gonna take, kicks him out as well, gathering up his clothes in trash bags and shipping him unceremoniously to Philly.  That’s where he once lived, with his father, but he hasn’t been there in years; I guess it’s time to relearn the neighborhood.  Oddly enough, his father is really into horses and keeps them in a rundown building, along with a group of other Black wranglers who have crafted a lifestyle as a way off the streets and into something special.  Cole will have to make a choice; dealing drugs with a lowlife friend or tending horses with his dad, because life is all about the paths you choose, and often about the paths chosen for you.

Like Nomadland, Concrete Cowboy is part drama, part documentary, bringing us inside a circle of real people with a real alternate lifestyle, teaching us about what’s out there and what’s possible.  That’s cool an all, that’s interesting, that kind of immersion, but that can’t be all there is.  We need more, like we needed Frances McDormand, and Idris Elba should have been that extra piece, but, very strangely, he was completely MIA.  I don’t know what exactly he was barely in this film, and I didn’t check his total screen time, maybe that technically proves me wrong, but the problem remains; it’s like he’s floating through a story in which is never belonged.  Instead, the highlight is on Caleb McLaughlin, who is a terrible actor, the worst part of Stranger Things by far, and a completely wrong choice for the leading role.  He’s bad, so the story seems bad, so he movie becomes bad, and the entire cycle goes round and round until audiences are spit out at the end wondering what it is we just watched.  I have to assume that’s not what the director was going for, but he might have wanted to make a hundred different choices if we didn’t want that result.