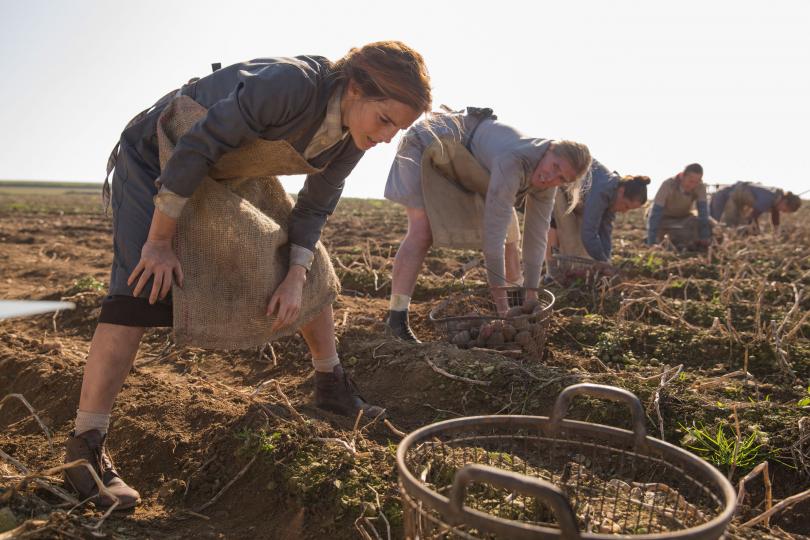 This film has gone through multiple title changes, from Colonia Dignidad to Colonia and now to The Colony, apparently.  But it isn’t the title that needed to have changed in order to make the movie great, it was the lead actress.  I think it’s finally time that we consider the possibility that Emma Watson isn’t very good.  We all loved her in Harry Potter, we gave her the benefit of the doubt in transitioning to other roles, but she’s proving over & over that she isn’t strong enough to be cast in the roles her name lends her to.  Noah, Regression, and now Colonia; Watson falters in every film, putting on a worried-yet-somehow-still-loveable face but forgetting that we’ll need a little more than that.  She might not have it to give, and we may stop trusting her very shortly.

Based on a true story, Colonia exposes the horrors behind one of the most secretive & sadistic cults in modern history, and the man behind it all.  Lena & Daniel are in love in Chile during the military coup of 1973.  As a supporter of the failed government, Daniel is taken away to a hidden interrogation center, to a place where no one will look for him, Colonia Dignidad.  This religious compound is run by Paul Schafer, a man who fled Germany ahead of child molestation charges, taking his devoted followers into the forests on Chile with him to start their own community.  Voluntarily joining up in order to find & save Daniel, Lena soon learns the terrible truth behind the commune; that women are separated, that children are abused, that religious zealotry runs rampant among the men, and that no one has ever escaped the barbed wire fences of the colony alive.

That this is based on fact is both appalling & appealing, disgustingly fascinating in a very captivating way.  The middle of the film is the true meat, where we see the horrible undercurrent of the cult through Lena’s eyes, the abuse & debasement, the frightening god-like power that Schafer has over his flock.  That’s the best, that’s the reason to watch, and for an hour I could not have been more hooked.  The problem is that there are 20 minutes before and after that just about ruin the film.  Watson & Bruhl had no chemistry, she coming off as a child-like figure who you can’t possibly imagine in a passionate romance in a foreign country.  The end, though, is all the director’s fault, as all the energy built up throughout the film comes crashing down, the writing jumps the tracks, and I actually began making disgusted noises in the back of my throat after every piece of dialogue or action.  The final sequences are insultingly bad and just about mess up the movie, until audiences are reminded at the very end that this evil man was real, that events like this took place, and that people were forever scarred.  The result of watching the film in its entirety is a mixed bag of great moments and embarrassing ones, creating a middle-of-the-road movie that I’d rather have absorbed in book form.