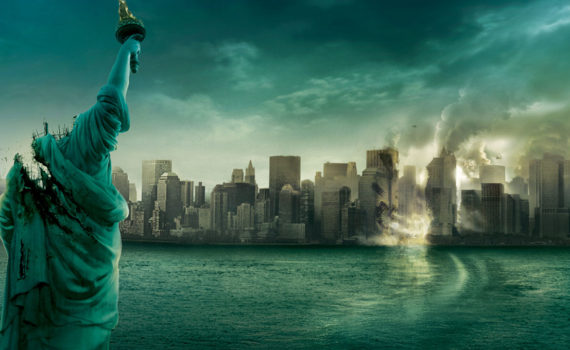 You know, I’ve seen Cloverfield Paradox and 10 Cloverfield Lane, but never the original Cloverfield, so I thought it was time to remedy that.  I always figured it would make me motion sick, even though that usually doesn’t affect me, and I was kinda right, but that’s not really the reason I didn’t end up liking it though, it was probably because it was mostly crappy.  I’m glad sci-fi and horror can be created in new & interesting ways, and I think we owe this movie some applause for its guts and longevity, but that doesn’t exactly mean that we can watch/enjoy it now.  Looking back, it’s just a stupid and poorly-acted mess of shaky cameras and shaky acting, which, I mean, isn’t what we should want.

Rob is taking a job in Japan, so his friends throw him a going-away party.  Among them are his brother Jason along with his girlfriend Lily, his idiot best friend Hudson along with the girl he likes Marlena, and then Beth, who Rob loves and has a tenuous relationship with.  They get into a fight and Beth leaves, which makes Rob sad, but he’s got bigger problems to deal with; all of a sudden some sort of creature erupts into New York City, rips the head off the Statue of Liberty, and begins destroying Manhattan.  Capturing the action on videotape for future generations, Hudson chronicles the group’s attempts at survival as they search the city for Beth, who they just can’t leave behind.

TJ Miller saves the film with his organic comedy, but even he can’t make up for what is otherwise a one-trick pony.  There’s the monster and the shaky cam, so I guess two-trick, but that’s it, the rest is really bad amateur horror that wouldn’t stand up without its dual props.  And I didn’t even like the camera work; I get that it makes the whole thing authentic but it also made me queasy, so I’d rather a director just make a good film, like 10 Cloverfield Lane for example.  Miller and his friends gallivant around the city avoiding death (or do they) and we see a monster from different angles; I guess I don’t exactly understand how this one movie spawned a franchise.  Hats off for trying something big, I guess it kinda worked, Cloverfield at least made its mark, I just wouldn’t recommend going back to watch it after all this time has passed; it wasn’t built strong enough to last.