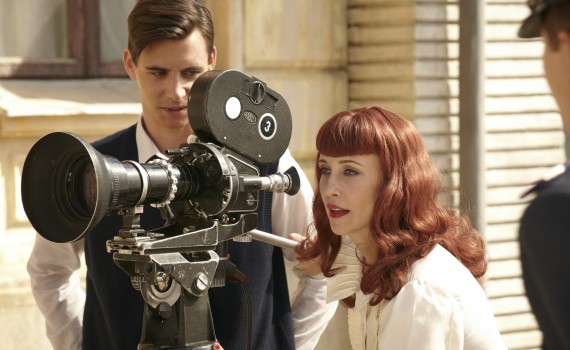 It’s never a good sign when, after you finish watching a film, the first thing you say to yourself is, “that was a terrible, terrible movie.”  And while that was my first thought after completing Closer to the Moon, it’s a much more complicated expression of my feeling toward the project as a whole than what it might at first appear to be.  By “movie” I mean entertainment, story, surprises, heroes; basically, the things we enjoy rather than the things we appreciate.  That would be a “film”, and by that I mean art, expression, depth, emotion.  The best features are a combination of the two, or do one better than anyone has ever done.  The problem with Closer to the Moon is that, yes, it falls into the “movie” category, but it fails in every way to be a piece that will keep us in our seats, completely abandoning the rules that govern movie-making.  So it becomes, in a very literal sense, a terrible movie.  I will spend the rest of this review trying to convince myself that it had enough positives to be a passable terrible movie and not a simply awful one.

Based on actual events, Closer to the Moon is a post-WWII drama detailing the story of a group of infamous criminals.  The twist is, perhaps they aren’t criminals at all?  In Romania during the war, a Jewish resistance force joined sides with the Russian army, attempting to help them eradicate the Nazi threat.  And although they ultimately succeeded, the results weren’t exactly what they had imagined.  Communist Romania wasn’t much better than Nazi Romania.  It was less violent, but all independent thought was stifled, all expression banned, all mistakes eliminated, and all differences abhorred.  And so the Jews who were once freedom fighters became bored aristocrats who were accepted rather than appreciated, slowly removed from public positions when they could be, pushed gently back behind the Communist curtain.  For a group of friends who were once fierce patriots, this slow death wouldn’t do, and a crime was planned to show the Romania people that this new “perfect” regime was anything but, and that choice was still a basic human right.

That’s the story, and it’s a fascinating one, painting a picture of a situation in which victory was not all that victorious.  The Russians were the lesser of two evils for the Jews in this area, but their lives only became longer, not more rich, and this unhappiness led to these complicated plots.  And there’s more to the film’s plot beyond the group and their caper.  After they were caught, they were forced to reenact their crime for a propaganda video, basically playing themselves in a movie before they met their ultimate fate; a firing squad.  True story, interesting time period, history you don’t hear a lot about, and a cool delivery of the time period.  And that’s the end of the positives, that’s the line that separates the historians from the general audience members.  Nae Caranfil directed this movie as if he had never seen one before.  He’s a Romanian himself, doesn’t do American movies, and so perhaps didn’t understand the necessary parts that we’d need to see in order to enjoy a historical dramody of this style.  We’d need, I don’t know, continuity of style, orderly plot points, a small twist, likeable/relatable characters, context, texture, realism; basically all the normal things.  He forgot to add these things to the movie, forgot to tell his actors that emotions were OK, forgot to make the action interesting, and seemingly forgot why we sit down in front of movies in the first place.  So the story takes itself as far as it can, but the actual film-making fails to keep the ball rolling.  You know you’ve made mistakes when Vera Farmiga comes off as sexless, Max Strong as wimpy, and the rest of the cast as extras in a b-movie.  Bad technique & choices make this a bad movie, watchable only for its historical specificity.