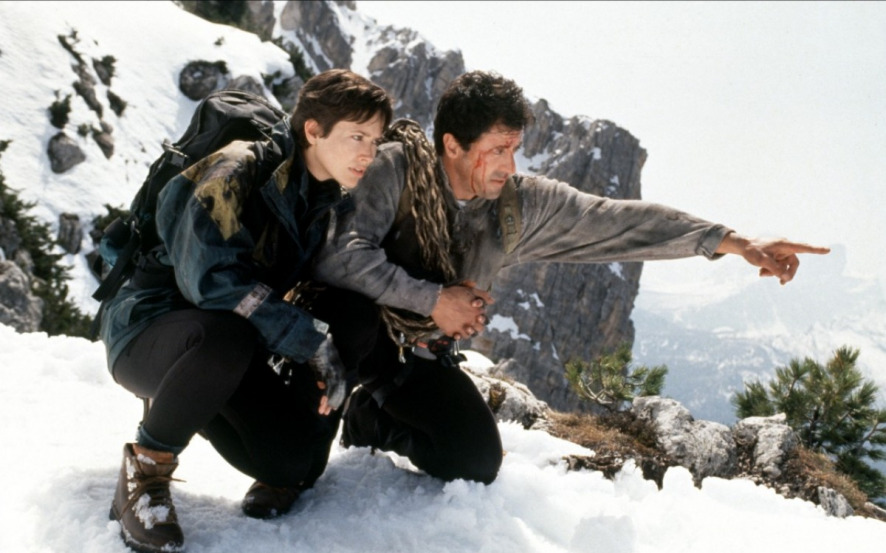 Cliffhanger is a movie so bad you’ll lose track of why you’re watching, like, 40 minutes in you pause the movie, get a confused expression on your face, and say to yourself, “what am I even watching, what in the world is happening, and do I know these people from somewhere?”  That last is fun, playing name-that-actor, but the rest is a more than a snooze fest, it’s your mind shutting down to protect itself from danger, mainly the danger of becoming so dumb that it implodes.  This is less a film and more an endurance test; can you watch it to the end despite every instinct telling you not to, and, if you do, will you come out the other side changed for the worse?

In a freak accident, Rocky Mountain Rescue workers Gabe & Hal find themselves watching Hal’s girlfriend fall 4,000 feet to her death.  Gabe can’t recover and quits the job, while Hal carries the anger around inside him like a bomb.  Months later, a radio call is placed by a group in trouble in the mountains, in need of rescue before a storm blows in.  Hal first, with Gabe behind him, head up the peak, but the message is bogus, and the party in the mountain are not what they seem.  Millions of dollars have just been stolen, but lost in the snow during the robbery, and now the bandits need the rescue workers to help them find the loot.  But they’ve got more than they bargained for on their hands, because these men are survivors, despite the death that still clouds their friendship.

That summary was hard to write, because this movie is hard to watch.  Cliffhanger is less a film and more a series of random events, sometimes in the snow, that give Sly Stallone excuses to grimace, flex, and yell.  I mean, it’s not like I’ve never enjoyed other movies where he does just (and only) that, but this time around is seems especially stupid.  You lose yourself after a while, like, what the hell is going on and what are these people doing, and no one does anything sensible and everyone just jumps or dies in slow motion, like it’s the most dramatic event since the mountains themselves were belched from the crust of the world.  God the acting is bad, Lithgow’s accent is worse, and of course neither leading man can really lead, because they aren’t at all talented.  I still probably couldn’t tell you exactly what happened to all the characters; suffice it to say they mostly died in weird ways because they were dumb, and someone ends up with some money at the end, but it doesn’t really matter who, because you’ll have lost all sense of reality and your taste level will have been significantly, sadly, and strongly reduced.