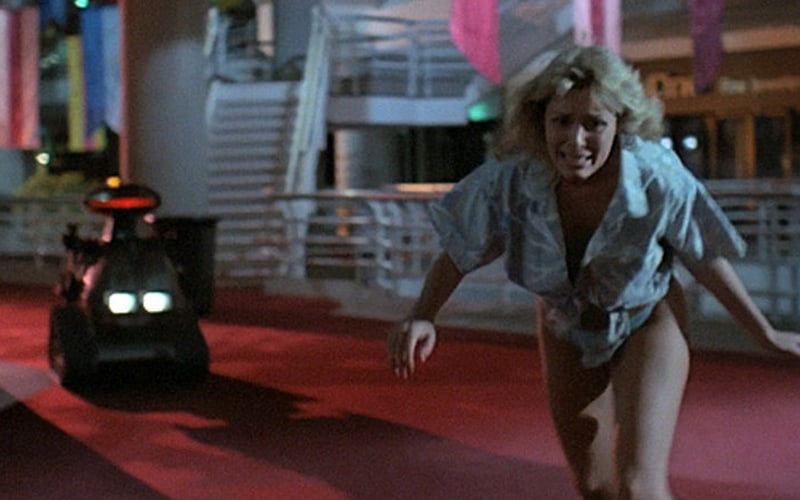 Chopping Mall; when a 2-star rating means you actually really dug the movie, since 2 is all any sane person could give it, since it’s really the worst thing ever.  I had the thought that you’d probably really enjoy it if you were high; it’s that kind of over-the-top badness that would most likely seem super trippy and fun if you were completely stoned.  I honestly wouldn’t know, never smoked pot before, but someday I might just pop an edible, turn on Chopping Mall, and have myself a good time, because this film was made for being whacked out of your mind.

A new high-tech security system have just been installed at a city mall, and it promises to be the best ever invented.  Three robots will cruise the many floors once the mall shuts down for the night, locating any trouble and stunning it until help arrives the next morning.  But when a power surge activates the robots and gives them self control, they begin a mission to eliminate all humans, not just evil-doers.  Unfortunately, 8 young people decided to have a drinking/hook up night in one of the stores while it was closed, and they will soon become prey for a much higher intelligence.

This movies is bananas, but in such a way that it’s extremely enjoyable, even with no marijuana involved.  But seriously, it would be so much fun if there was, so feel free to take that as a recommendation.  Teens are getting killed, people are having sex, janitors are electrocuted, robots make jokes; it’s a wild time.  And it’s the worst acting & production & development ever, the whole thing is a shit show, but my god what a laughable, crappy 80s spectacle.  The mall, the stores, the clothes, the hair, the whole thing; it’s a ridiculous good time, but also insanely terrible, so I guess that balances out somewhere near ‘awesomely awful’.