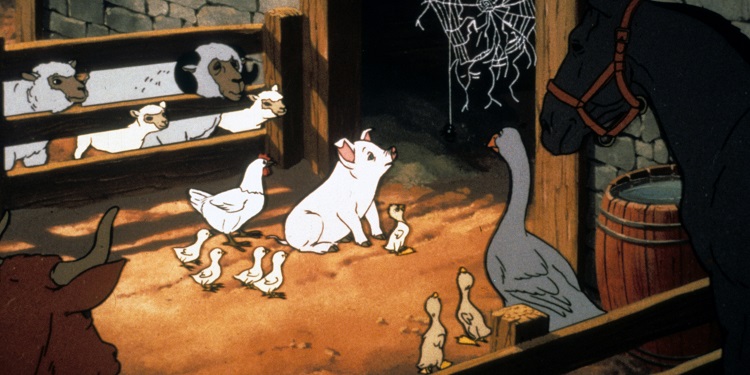 One of the classic childhood musicals of our time, Charlotte’s Web is, of course, also a classic book, but comes to life so well in this simple film that both can exist and be magnificent at the same time.  E.B. White’s story is animated for us in the most basic of fashions, but that’s hardly a critique; it was the 70s after all, and these are barnyard animals, nothing too complicated, so why push the boundaries, let the story speak for itself instead.  And that’s exactly what happens; the tale is loud and clear and will stick with you into your adulthood if you watched as a kid, and will delight whole new generations of children if you share its beauty with them.

Wilbur is a runty pig, but that doesn’t mean he’s not special.  In fact, he’s loved dearly by a farm girl named Fern, who takes care of him while he’s young & little, although she has to give him up when he gets older.  Wilbur isn’t such a little guy any more, and he’s going to be butchered for meat, just like all the other pigs on the farm, when cold weather sets in.  But he’s not ready to die, he has a great zeal for life under the barn, and his new friend Charlotte is going to help him stay alive.  She’s a spider whose web is in the corner of Wilbur’s doorway, and the messages she begins to write with her silk will bring hope to a desperate pig, and will inspire love in everyone who reads them.

What a delightful tale, and what a time capsule to watch this movie with my family and experience the joy all over again.  Just the narration at the beginning was enough to transport me back in time to when I used to watch this movie over & over again, and even that was 15-20 years after its release; I can’t imagine what it would be like for someone who loved this story as a kid in the 70s to watch it now, how it would take them all the way back.  The book is great, obviously, and the musical version is very well done, very respectful of the novel, which is really important to me.  The songs, the characters, the animals, the simplicity of the timeline; it’s just very lovely.  Charlotte’s Web is one of those films that will bring a tear to anyone’s eye if you let it, and you might as well let it; you’ll feel better after, I promise.