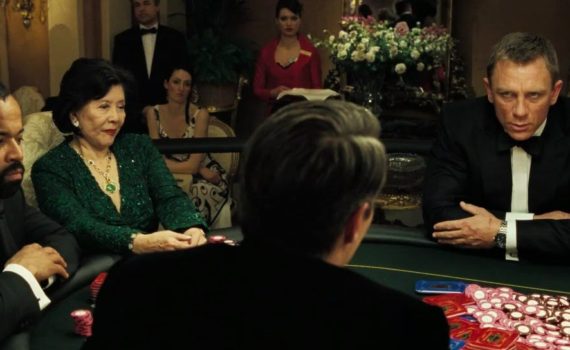 In the newest iteration of 007, Bond is often referred to as a blunt instrument, a weapon, man’s passion instead of man’s mind.  That’s a different James than we are used to; Connery was super cool, Moore was calm & quippy, Brosnan was over-the-top.  But the new franchise needed a new attitude, and in walked Daniel Craig.  He’s not hunky and richy like the others, but he did bring a certain edgy swagger that was fascinating, and he exemplified qualities that perhaps Bond had been lacking: toughness, impetuosity, temper, and brute strength.  Basically, a blunt intsrument, with chipped-ice eyes that could freeze you in your tracks.  Craig was a unusual choice, but I supported the move, and, what’s more, he impressed right out of the gate.

James Bond has just earned 007 status, beginning his career with key kills and the tentative trust of M, the woman in charge of British special intelligence.  His first mission; stop Le Chiffre, a banker to the world’s terrorists groups, who is planning bombings to plummet stock that he has bet against, so that he and his investors will make a fortune.  When Bond stops his latest operation, Le Chiffre organizes an extreme high-stakes poker game to win back the money, only Bond is there to see that he doesn’t.  With the help of the beautiful Vesper Lynd, Bond trusts to his luck and skill, but finds himself stabbed in the back by someone he least suspects.

Craig really was an odd choice for Bond; he’s thick, he’s blonde, he’s brutal,, he just doesn’t hold the wealthy air that some of his predecessors did, and that looked like it could be a problem for his character.  Instead, they simply flipped the script, made Bond a child from a rough background who grew up elite, thus carrying a chip on his broad shoulders who kills to protect his country.  It worked, Craig worked, and although this Bond is less funny and less casual, we needed that after the farce that was Pierce Brosnan.  Of course, this particular film in a remake, but that’s a good place to start, and it’s nice to see James at the beginning of his career, making mistakes and getting his feet wet.  Green is excellent as usual, Mikkelson is a stellar object, Judi Dench is a great M, and Casino Royale succeeds both when broken down and when watched for simple entertainment.  It’s grand, it’s fast, it’s well-acted, it’s homage while also being modern; the stage was set for Bond to continue with a vengeance.  Unfortunately, not every episode of this new series would be as golden.