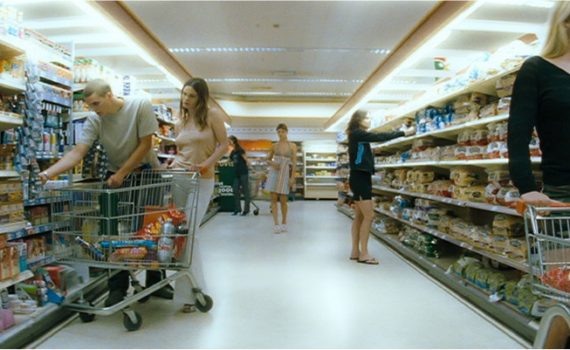 Cashback is a Sean Ellis short that was crafted into a feature, and you can feel that small film hiding within this larger one, like a great idea that gets lost in the shuffle of a longer tale.  I guess you take what you can get, when a studio offers you a shot at making a real, full-length picture, but a little of the magic was lost along the way, and that’s too bad.  Still, the movie that we’re given is worth the watch, because the concept is so strong and the fleeting moment so magical; it’s a unique experience, even if there are two ways to have it.  With a cast you’ll almost never see again, Cashback is a quiet gem that might be the cinematic equivalent of a one hit wonder, but that doesn’t mean you can’t dig it.

Since his breakup with his girlfriend, Ben, an art student, hasn’t been able to sleep.  He’s not broken-hearted exactly, he’s the one who ended it, but he’s troubled by the idea that time is constantly passing without his really living it, not really knowing what it is he’s supposed to be doing and feeling.  So, since he’s up anyway, Ben decides to get a night job at a local supermarket, and trade in his hours for money; why not.  And during those abnormal hours, his mind allows him to to play with time, to pause it, to watch it tick by in slow motion, to experience moments as if they could last a lifetime.  He uses this skip in time to see beauty in a way most don’t get to see it, and to draw what he sees with a freedom he’s never felt before.

Cashback is a little like American Beauty, a film that can really move you if you’re young & impressionable, since it touches on sex, love, growing up, seeing the world differently, wanting something other than the normal, comedy in the mundane and awkward.  I remember really liking it the first time I saw it, and it was pretty provocative in its look at the female body, the beauty inherent in the form.  Now, I see a little amateurism and a little juvenile preoccupation with breasts, perhaps a touch of overly-artistic, bag-floating-in-a-breeze, coffee house snapping, but that doesn’t mean all is lost.  It’s still a cute cast that you never really see again, it’s still a nice message of appreciating the moment, and it’s still surprisingly crisp for a feature by a team that isn’t very experienced.  I’m not sure who would like it right now though; maybe, again, 18-year-old young men who want to believe that life is beautiful, while also wanting simply to see ladies naked.  Have the times really changed or is it still as simple as that?