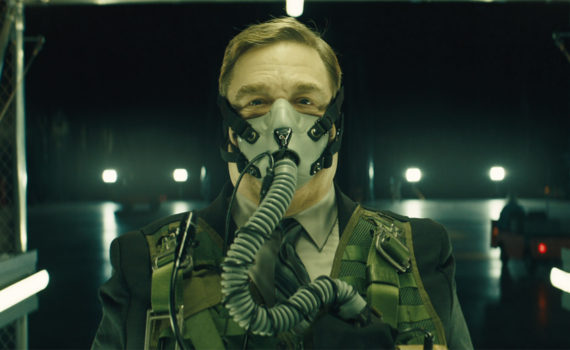 Under the radar in 2019 was a sci-fi flick that missed an opportunity to look and be cooler, finishing as a forgotten film instead of the attention-grabbing tech thriller it could have been.  Captive State was an alien invasion story tailor-made for American audiences, and yet it landed so cold most people wouldn’t touch it; why?  Well, the reason is in the watch, and you won’t escape noticing the flaws, even while you enjoy what could have been.  With the backstory and the action, this could and should have made a larger impact than was actually felt, which is too bad, because the groundwork was there, it’s just the execution that failed to show up.

We are not alone in this universe, and now we know that for a fact.  An alien race has descended to Earth and has taken over our planet, with very little fight from the petrified humans.  They simply had the superior technology, they were too organized, and we didn’t stand a chance; better get used to new management.  The aliens take control through lucky humans who now find themselves rich and powerful, while our new enemy goes below into bunkers to rule by proxy.  But humanity hasn’t given up that easily, not after nine years of being conquered, not after being beaten down before; we will rise again.  A web of insurgency has emerged when all actors were thought to be dead, with the hero Rafe Drummond at its center, and with his brother scrambling to catch up to events that are spiraling out of control all too quickly.

Captive State would have worked better as a limited series, where we got to learn about the different roles in the resistance and about the aliens too, where we followed along each step of the way, seeing events unfold through the eyes of the confused main character, until it all came together in the end and we were left standing to applaud.  That’s how it should have gone, because there’s something cool here, it just wasn’t given to us correctly.  The creatures, the Legislature, the rebels, the process, the intrigue; man there were some awesome pieces to this puzzle.  But the director failed to fit them all together, or else should have found a different venue.  The movie was too rushed, to chaotic, without giving us time to care if the players lived or died.  Also we needed more history, more Chicago before the war, more life during the occupation, and even some better cinematography to produce some wow moments with the visuals.  The color red pops up for a second; that’s about all you get from an artistic standpoint, and that sucks, because they could have at least followed Godzilla and made the movie look cool.  The acting was good, the story was solid, I was ready to enjoy, but the delivery was all off, and we should have watched these events over a week or a month, that would have made them so much more impactful.  As it was, Captive State was enjoyable, but not to the full extend of its capabilities.