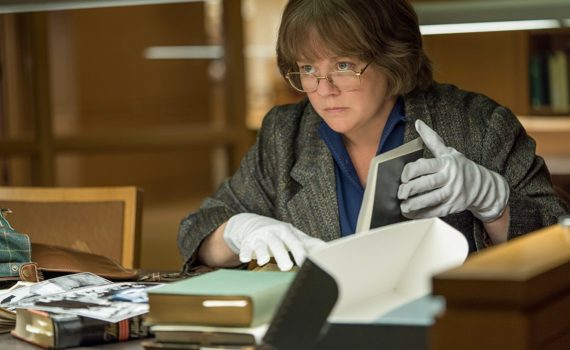 Melissa McCarthy attempts to make the transition from comedy to drama in time to be nominated for a Best Actress Oscar in Can You Ever Forgive Me?, a true story with a ton of themes and some real talent supporting them.  We’ve seen many actors try it before; Steve Carell is currently continuing down the same path, turning comedic stardom into awards consideration with heavy roles that catch our attention not only because of their weight, but also because of who is attempting to fill them.  McCarthy is a natural comedian, I don’t think that can be argued against, even if her style is not your style, but she has yet to prove herself as an all-around, top-quality actress, which is exactly what she attempts here.  However, though the film itself is strong, she simply proves the opposite; that she is not up to the caliber of her co-stars and most likely doesn’t have the ability to get there.

Based on real events and a memoir written by the author of these events, Can You Ever Forgive Me? is the story of biographer Lee Israel’s crimes against the literary world, but also her struggle to survive the loneliness and desperation of a life that didn’t turn out the way she had planned.  Lee gained a small amount of fame for her books, lived in New York City, tried to write more original pieces, but never developed as a professional, to the point that she ran out of money and out of options.  The plan she turned to was a simple but illegal one; write letters under the guise that they were penned by famous authors, pass them off as real, and sell them to collectors who couldn’t know their authenticity.  For a time it worked, and she, along with her partner in arms Jack Hock, made a healthy profit.  But crime doesn’t pay, at least not in the long run, a truth that would hit Lee Israel hard sooner rather than later.

This is a wild true story, partly because you completely understand how Lee got herself in this situation, and you sympathize with her, at least partially.  She isn’t evil, she paid her penalty, wrote a book about her crimes, and now here we are, so I guess audiences can make their own judgements, but the film definitely comes from a perspective of understanding.  That’s not to say that the filmmakers condone her actions, it’s complicated, and you’ll just have to watch for yourself to see where you stand on the subject.  Regardless, it’s a well-made movie, asks interesting questions, and presents a fascinating plot, so watch for those aspects alone.  But don’t watch expecting Melissa McCarthy to transform into Amy Adams; it’s just not happening.  She’s not talented enough to fit in with those who have the chops, and her co-stars most definitely do, exposing her as an actor who’s trying, not an actor who’s already there.  Grant was phenomenal, Wells was great too, and they shone as side characters, brightening every scene in which they appeared.  But ultimately the film was all in on McCarthy, make or break on her performance, and I just don’t think she was capable of doing enough to carry the project.